First of all, I would like to say that this is an incredible database! I had no idea that there was a collection of these African American newspapers that spans more than a century.

It took me a few tries to find a nice buzz word to put into the database search. I found that the word “spiritual” got me results that most relate to this course. This text “Sylvan Worship” was a bit difficult for me to read at first. This newspaper doesn’t make clear who Curtis, the narrator of the text, was. This made it hard for me to fully comprehend what they were saying without the slightest bit of background. Because all of the texts from this database are from African American newspapers (or other types of text), I first assumed that the narrator was black. However, the more I read, the more I felt that this person was from the African American community. This is not based on his knowledge or opinions on the topic of African American spirituals, but the language he used to speak on the topic was from an outsider point of view. In this sentence, “No race is more devotional than the African and to no class of people does the camp meeting revival prove so effectual as with them.” it sounds like Curtis is making statements based on his own observations of Africans and African Americans as an outsider.

Whether or not Curtis is African American, his points are huge generalizations and he doesn’t really use specific examples to illustrate these points. This definitely would not slide in a modern-day discussion (especially in our class).

After reading the text over one more time, I have a strong feeling that Curtis is not black.

In searching through the Sheet Music Consortium, I came across several spirituals arranged by H. T. Burleigh. These publications, such as Oh Peter Go Ring Dem Bells, include a note written by Burleigh about spirituals, in which he describes them as “never ‘composed,’” but “spontaneous outbursts of intense religious fervor.” He touches on other topics we have discussed in class as well, writing that they are “practically the only music in America which meets the scientific definition of Folk Song,” and warning that they should not be treated as “‘minstrel’ songs.”1

Following his statement on folk music, he writes:

“Success in singing these Folk Songs is primarily dependent upon deep spiritual feeling. The voice is not nearly so important as the spirit; and then the rhythm, for the Negro’s soul is linked with rhythm, and it is an essential characteristic of most all the Folk Songs.”1

Here Burleigh seems to be arguing for an authenticity in both the feeling behind a performance and the presentation of the performance as rooted in the history of spirituals as black music.

On the other hand, he elaborates on his warning not to treat spirituals as minstrel songs with the following:

“It is a serous misconception to . . . try to make them funny by a too literal attempt to imitate the manner of the Negro in singing them, by swaying the body, clapping the hands, or striving to make the particular inflections of voice that are natural with the colored people. Their worth is weakened unless they are done impressively . . .”1

Obviously trying to make a serious song comical undermines it, but I was struck by the extent to which Burleigh connects an unworthy and unimpressive presentation directly with how literally black performance practice is imitated. “Swaying the body,” “clapping the hands,” and singing in dialect are all things that St. Olaf’s choirs, for example, do in an effort to present the music with “deep spiritual feeling,” as Burleigh encourages earlier. He also writes, “the voice is not nearly so important as the spirit,” yet he implies that the very things here connected to the spirit take away from the spirituals’ worth. Though he is discussing making a song comical, he strongly suggests that imitation of black performance practice itself is antithetical to an impressive performance. 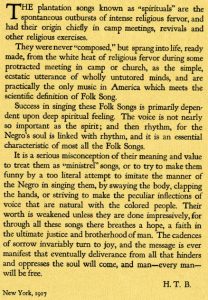 Maybe this is simply because black performance practice at the time could not be separated from minstrel comedy. This could allow for the St. Olaf choirs’ use of elements of black performance practice in a time when it is no longer so directly connected to minstrelsy in audiences’ ears. However, Burleigh was also a major part of the movement to “legitimize” black spirituals by arranging them in a Western classical style. Given this, he could have indeed viewed the “spirit” he talks of as needing to be presented through a white musical context in order to give it legitimacy. On the other hand, if he was writing for a white audience, his message may have been at least partly motivated by his not wanting imitation of black performance practice by non-black performers. Whatever the reasons for the specific performance considerations he discusses, though, this short statement on black spirituals shows some of the many complexities that accompany their performance.

In combing through the archives to find documents that would be valid proof for my blog post, the problem of preservation and what counts as music that should be highlighted as an authentic expression of what it means to be a black American in the late 1800s kept bothering me and continues to do so.

Epstein notes the fact that the songs that were created by black Americans in the lat 1800s were not recorded for posterity, like corn songs.1
We know that there are a number of songs that failed to be preserved and passed down that told the experience of slaves, perhaps in a way that we will never know as present day audiences, far removed from that experience ourselves. However, in thinking about all of this and in looking through the archive, a question arose: how would a song like the one below fit in?

This so-called ‘Ethiopian Song’ was written as a minstrel song but it retains the same elements of a spiritual. Furthermore, it was written by a black composer Gussie Davis. It arguably is at the very least inspired by the spirituals that were an established form of music by this time. Does this mean that it can be seen as a part of that tradition?

The lyrics themselves are the puzzle. As one can probably deduce, the song is about someone climbing up to heaven. There are multiple references to biblical objects like New Jerusalem and Satan which were also common in spirituals. Would it then fit the criteria of a spiritual?

If the answer to the question of whether or not it is a spiritual is that no, because it is a constructed form of music that is not an authentic experience, then why do the songs performed by slaves for their white owners for entertainment, documented by Southern, not fall into the same category? It has the same aspects of being a learned form, of falling into the “black entertainer with a white audience” category and placed the entertainer in a hazy sphere of identity.3
Does this change the perspective we have about “Clime up de ladder to de clouds”?

What about when we learn that Gussie Davis (who composed the song) grew up in Ohio and never experienced slavery?4 No I could not find a source for this, but would things be viewed differently if we found out that his parents had been former slaves? Or that he could directly point to a spiritual that had inspired this song?

Even though we may not agree that despite all of this, this song still does not have a place in the the spiritual tradition, it is still important to think about the questions this example raises. How do we understand what makes a black spiritual? Who gets to make it up? Does direct influence of spirituals or experience have to be explicitly affirmed or can we find other ways to hint at it? What would it mean if we included minstrel songs into the spiritual repertoire?

I don’t know if there are answers to those questions but they are worth thinking about.