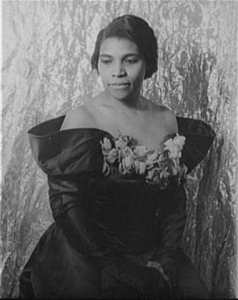 After hearing Carol Oja give a lecture on Marian Anderson, a black woman and arguably one of the greatest opera singers of the 20th century, one thing that stood out to me is that Marian Anderson did not consider herself an activist. It is easy to question Marian Anderson’s hesitancy in this description of herself, especially from a contemporary standpoint when celebrity political activism is not so taboo. After all, Marian Anderson’s time of popularity was during the pre-civil rights era. She was still a black singer in an overtly racist society, and this placed limitations on her. Despite the overwhelmingly white field of opera and classical music, she gained popularity among greater American society. She had great vocal talent, but her “palatable” performances and public presentation of self likely contributed to her success as a black singer in a racist society. She appealed to common western society through things such as her western vocal training, western repertoire (although she did sing spirituals along with European repertoire), and western dress. This is not to say she did all of these things purposely to appeal to a greater, white audience. She was also extremely popular among black communities, and her pure vocal talent leading to much of her success cannot be denied. This point is also not implying that appealing to these traditionally western ways was necessarily against her nature. However, as one of the first famous black opera singers, her appeal to white, “traditional” opera culture likely aided her popularity gain on such a mass scale.

Although Marian Anderson in many ways appealed to white operatic tradition, she also acted in a variety of ways to show resistance against the racism present in her life as a vocalist. She had performance contracts that prohibited segregated audiences, gave her famous Easter concert at the Lincoln Memorial (video clip shown above) in response to the DAR denying her performance at the Constitution Hall, and was the first black singer to debut with the Met. Marian Anderson’s impact on the Civil Rights movement was indeed significant. 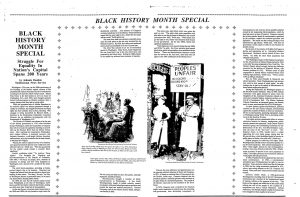 The newspaper clipping on the right, published in 1991, discusses the struggle for equality for black people over the past 200 years, and mentions Marian Anderson in the fourth full paragraph in the far right column. The impact Anderson’s Lincoln Memorial performance had in “reactivating the NAACP in Washington” is acknowledged, thus emphasizing her important role in the Civil Rights movement as a whole. Some may question Anderson’s denial of an activist label, and even criticize her for not going “all the way” in terms of her activism. Although Anderson’s true motivations behind this statement cannot be clear, one can give her the benefit of the doubt when appealing to Du Bois’ idea of “double consciousness.” W. E. B. Du Bois coined the term “double consciousness” as a phenomenon in which a person’s conception of self manifests under conditions of racialization. Thus, there are different types of self formation depending on one’s racial group and societal context. Du Bois argues that the “self” develops from others’ conceptions of us. For black people and other people of color, Du Bois believes a sense of “two-ness” forms due to their dual positions: one in the “dominant community that denies their humanity and [one in] their own community which is a source of support and an arena of agency” (Itzigsohn). There is constant tension between these two versions of the self that is manifested within people of color living in a racist society.

Marian Anderson’s double consciousness manifests as her “self” that had to survive as a black singer in a white society and her “self” that was a black woman outside of a white context. It is possible that Marian Anderson resisted the label of activist because of tension between her two selves. She lived in a racist society and likely would have been criticized even more than she already was if she had been more explicit about her activism. At the same time, she acted in ways to resist the racism within society, as mentioned earlier. Double consciousness and tension of the two selves may not have been at the root of Anderson not considering herself an activist. However, it is important to note that Marian Anderson’s lived experiences likely shaped her perception of self and the way she acted as a public figure nonetheless.

The day after the premiere of George Gershwin’s Porgy and Bess at the Colonial Theatre in New York City, a review of the performance appeared in the New York Times that would both articulate the positive aspects of the opera while also aptly summarizing its importance to American music. A portion of the opening paragraph reads:

“An audience which assembled, uncertain whether they should find a heavy operatic work or something more resembling musical comedy, discovered a form of entertainment which stands midway between the two. The immediate response was one of enthusiasm that grew rather than diminished as the evening progressed.” [1]

In other words, Porgy and Bess was an immediate hit because it successfully bridged the gap between the styles of European grand opera and American musical theater in the style of tin-pan alley. By extension, Gershwin was cementing his reputation as the quintessential American composer: a perfect combination of elite artist and regular American. While this synthesis may appear to be a contradiction, there are a number of descriptions in this and other contemporaneous reviews that support this statement. 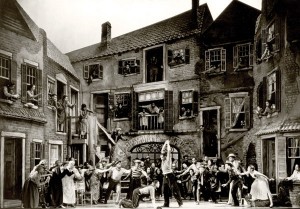 A scene from the original Broadway projection of “Porgy and Bess”.

From the New York Amsterdam News:

“The first act represents George Gershwin’s most serious writing. It is Gershwin struggling for a greater expression, endeavoring to transcend into the world of great music. Contrapuntally speaking, he does. This is evident in the crap game fugue.” [2]

The author (Allen Gilbert) goes on to compare Gershwin to “Brahms, Bach, or Beethoven” for his clarity of theme in symphonic writing, effectively lifting him into a pantheon of greatness. Yet, Gilbert goes on to call the second act a “let down”, describing it as a musical side-show that more resembles a smorgasbord of primitive American music (hot jazz, broadway ballads, negro spirituals) than it does the work of a grand master. He attributes to Gershwin a false quote suggesting that opera is for the “masses” but that they cannot understand it if it’s not dumbed down for them.

But it is the third act that truly shows Gershwin’s greatness, a “gathering together of the parts” that utilizes both ends of the spectrum without compromising on beauty and emotional power. It is with this in mind that the author crowns Gershwin as the “practical idealist”.

While this is a deserving title for the young composer, we can see quite clearly how mind-numbingly kitschy this is, yet another example of American determinism seeking out the next great musical representative for the U.S. of A. This is especially frustrating when we consider the most problematic yet simultaneously inspiring aspect of the work and its initial performances: its nearly all-Black cast. While the New York Times review emphasizes this historic achievement (even including it in the subtitle), the New York Amsterdam review doesn’t even mention it. The first lauds each cast member and the “characterizing detail” given to a normally inhuman and primitive setting; the latter lauds only Gershwin and his ability to humanize to black music without mention of the African Americans involved.

I don’t mean to suggest that Gershwin is responsible for this discrepancy, but it is worth remembering that in the evolving world of American art music in the early 1900s, Porgy and Bess may have been more akin to minstrelsy than to grand opera for many white audiences. Though an article in the Chicago Defender less than a month later claims that “race music is dignified” by Porgy and Bess, this primarily African-American viewpoint doesn’t necessarily reflect a popular perspective of the work. [3] While Gershwin’s “idealistic” genius and his roster of memorable songs is undoubtedly responsible for the works success, it is fascinating to see how the “practical” matters of the performances may have been ignored.