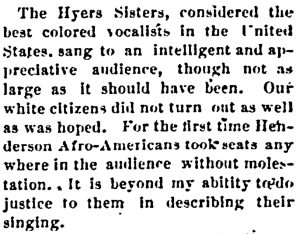 These Black newspapers offered much praise but did so in ways that reflect how the authors perceive the Hyers Sisters’ careers. This 1886 article, published in the Cleveland Gazette, reviews a performance of one of their old dramas. The author wrote that their theater company has the best Black musical and dramatic talent in the country, and they deserve a packed crowd everywhere they perform.2 Such high praise comes with a qualifier of race, asserting that the Hyers Sisters are great Black musicians rather than simply great musicians. 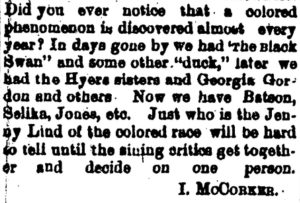 The designation of the Hyers Sisters as remarkable Black musicians was also present in comparison to other musicians. An 1892 article from the Topeka Call claims how Black stars like the Hyers Sisters are frequently “discovered,” yet there is no “Jenny Lind of the colored race.”3 When this article was published, the Hyers Sisters had spent 16 years performing musical theater works. Yet, they still drew comparisons to Lind, a white Swedish opera singer. Comparing these performers demonstrates how white audiences thought the Hyers Sisters were as talented as famous white performers. This comparison might have given the duo status and prestige in the eyes of traditional (rich, white) concert-goers.

In 1902, the year after Emma Louise Hyers passed away, the Indianapolis Freeman reviewed a performance by the Mahara Minstrels. The article notes the lack of Black comic opera performers. It reflects upon the career of the Hyers Sisters that led to the concert they reviewed. The author asserts that the Hyers Sisters

“would have called forth praise from such masters as Ludwig Van Beethoven, Joseph Haydn, Wolfgang A. Mozart, Friedrich Handel, Franz Liszt and Felix Mendelssohn had they not died before that time.”4

Only Mozart and Handel were well-known for their operas. Thus, the author evokes white European ideas of musical greatness to give the Hyers Sisters authority with white audiences.

Throughout their careers, the Hyers Sisters were widely acclaimed musicians. However, the constant comparisons to white counterparts, often from genres they did not participate in, reflect the effort to have white audiences take Black music seriously. While not in the same context, Eileen Southern notes how white audiences misunderstood the music of enslaved people earlier in the 19th century.5 Such ignorance has made it challenging for white audiences to celebrate incredible artists like the Hyers Sisters for their talent without comparisons or qualifiers.