The fascination. The excitement. The muse. I have so many mixed feelings when it comes to looking into minstrel show advertisements and newspaper article sections about these apparent highly sought-after shows. I cannot help but question where this grand excitement for these shows is rooted. Was it for entertainment? The humor? The sophistication? The representation? As I looked into newspaper sections that talked specifically about the Campbell Minstrel group, I started to find some possible answers and drew some parallels between our most recent reading by Eric Lott about the concept of love and theft.

The newspaper sections that I found are from the New Orleans Daily Creole, “a Creole pro-slavery newspaper launched in 1856.” Is it also noted that scholars of the African- American press generally exclude the Daily Creole when referring to these types of newspapers. In reading this statement written about this newspaper I found on a database dedicated to African American Newspapers, I found this to be quite odd. I see a pretty distinct dichotomy between the foundational intention of this news source vs. how they portray the minstrel shows in these newspapers. This can definitely allude to Lott’s mention on how there seemed to be a general theme of “love” (eroticism, “celebration”, etc.) vs. “theft” (exploitation, insensitivity, etc.)- both terms in a great deal of contradiction. The minstrel shows seemed to be quite “sophisticated” based on the fact that they had a “change of programme nightly.” This broad repertoire most likely appealed to the general public quite extensively, almost giving them more of a reason to come back each night to hear a different show, even getting to hear “new selections” of various songs written for the shows. 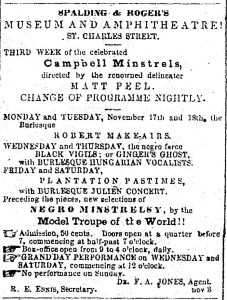 This other section of a newspaper clipping brings out more fundamental draws and attractions to the minstrel shows. The sentence where it talks about how Matt Peel, “never tires the ear or the eye” goes to show the fascination with the visual and audio aspects of the minstrel show- being drawn to the aesthetics and physicality of enslaved people. Even when referring to the jokes and how they are “excellent”- this can apply to the concept of “celebrating” or treating the experiences of black enslaved people as mere entertainment or a type of comic relief.

These fascinations with the “grand” minstrel shows of the 1850s prove to show that there was a huge draw and attraction to the black experience- having shows go day after day. The “rage” continued for decades (as we can see in the Campbell Minstrels seeming to have toured for over 12 years). Although, it must be noted that all of these reviews and ads come from a pro-slavery newspaper- which alludes to the themes of “theft” and stealing of the black enslaved experience. It is so crucial to dive deeper into these themes that we read and really see the real-life evidence and sources that provide us with proof of these themes that we have read about.