Lillian Evanti was a prominent opera singer, and one of the first, if not the first African-American women to tour with a European opera company. Additionally, she was a founding member of the National Negro Opera Company, performing as Violetta in their performance of Verdi’s La Traviata. As a famous performer, Evanti gave concerts and recitals all over the United States and Western Europe. One such performance was at the Hall of Americas in the Pan-American Union, celebrating many Latin American composers. 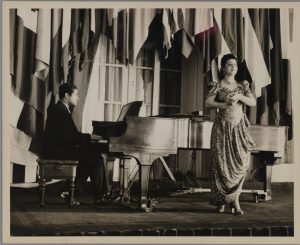 Evanti’s program included works from Mexican, Cuban, Argentinian, and Venzuelan composers (both women and men), an aria from Il Guarany, an opera composed by Antônio Carlos Gomes, as well as a few of her own original compositions. Her performance of a diverse range of composers shows that she uplifts silenced and underrepresented voices. Her contribution of original compositions for this occasion, “Himno Panamericano,” and “Honor a Trujillo,” not only shows musical virtuosity, but also a willing spirit to participate in diplomacy and international relations. 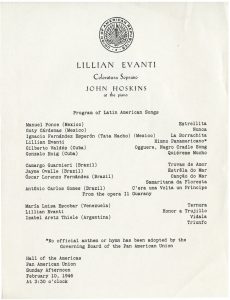 While researching Lillian Evanti, both for this blog post and for my group mapping project, I found myself confused and frustrated at the fact that recordings of Lillian Evanti singing either do not exist, or are extremely hard to come by. It made me wonder why such a prominent and successful singer was not documented in this way. In just a few simple google searches, I found recordings from two other female opera singers who were contemporaries of Lillian Evanti. So why are there no recordings of Evanti even though her contemporaries received this kind of documentation and legacy? Of course, I cannot say the true answer because I do not know. But I can only speculate as to why Evanti’s legacy lives on in pictures rather than audio. Even if she was a famous performer and traveled the world giving performances, the fact still remains that she was African-American. Her success was revolutionary and a great step towards diversifying the Western canon, but unfortunately her identity as a member of a marginalized community may have contributed to her lack of existent audio recordings compared to her contemporaries. While you might not immediately think about the repercussions of something that happened 80-100 years ago, this proves that the effects of racism and inequity are still felt today, as now we cannot truly discover the legacy of Lillian Evanti. We can read reviews of so many concerts, recitals, and other performances telling us how beautiful and lyrical her voice was, but as far as I know, we will never be able to hear her voice and understand part of why she was so successful.

One of the most beloved African-American composers of the late 19th and early 20th centuries was Harry T. Burleigh. Born and raised in Erie, Pennsylvania, he learned to sing spirituals from his mother and sang in various church and community events throughout his childhood. In his teenage years, he became known as a fantastic classical singer, and got to work at and see many famous people perform, such as Venezuelan pianist Teresa Carreño. Then, a few years after high school in 1892, Burleigh began to attend the National Conservatory of Music in New York on scholarship for voice (1).

But, by the title of this blog post, how does any of this relate to Czech person and well-known composer Antonín Dvořák?

Well, Dvořák happened to immigrate the United States in 1892 also to become the director of the National Conservatory of Music! He both taught classes and conducted the conservatory orchestra, which Burleigh also happened to become the librarian and copyist for. As a result of this, Dvořák and Burleigh worked together frequently, which eventually turned into a friendship. A particularly cute story from their friendship comes from a letter Dvořák wrote to his family back home that his son “[would sit] on Burleigh’s lap during the orchestra’s rehearsals and [play] the tympani” (2).

However, the relationship between the two bettered their compositions as well. Dvořák would often overhear Burleigh singing spirituals to himself while working or in the halls, and, not knowing much about spirituals, would talk to him about them and learn many of the songs from him. Dvořák then encouraged Burleigh to begin composing and arranging these spirituals (1). This would kickstart a prolific composing career for Burleigh, who incorporated spirituals into many of his original art songs, arrangements, and other compositions, and amassed a portfolio of over 200 works. Here is a review of his works from the Afro-American Cullings section of the Cleveland Gazette (3): 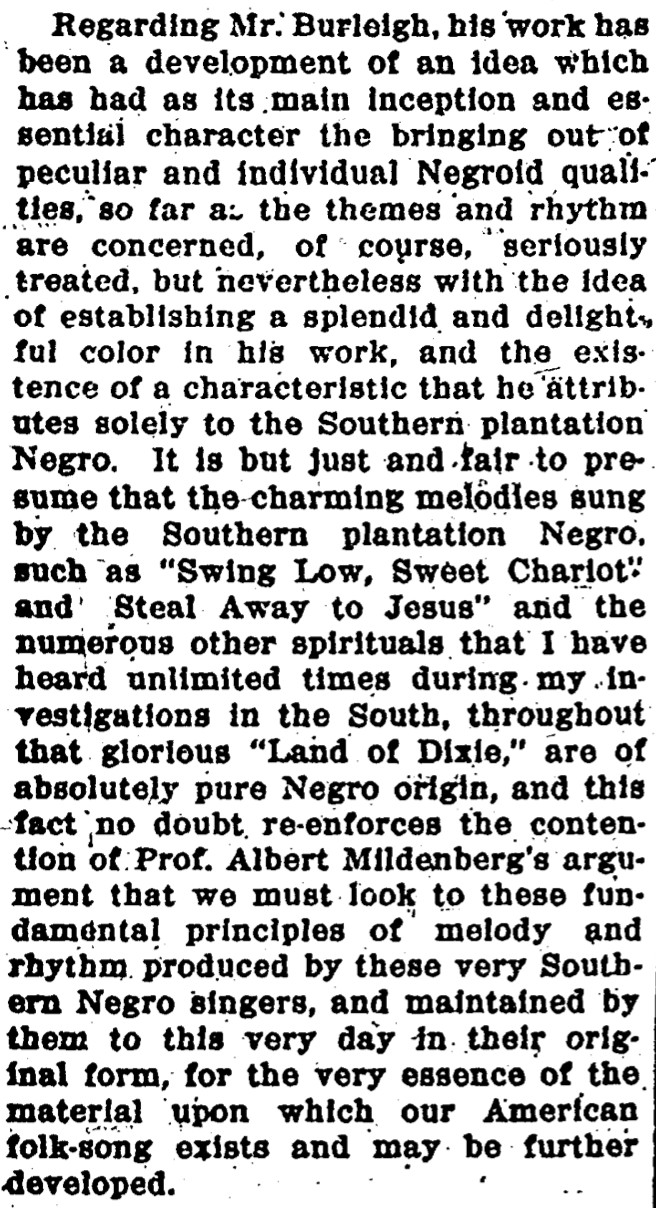 Dvořák also found ample inspiration in the African-American folk music he learned from Burleigh and gained a huge amount of respect for it. In fact, he was so displeased that white Americans did not care for African-American music that wrote several news articles in the New York Herald, in which he argued that the soul of American music lies in Black music, which the Herald’s white readers found difficult to swallow, to say the least. Here are a few words from an article he wrote in 1893, with even a picture of Burleigh (4): 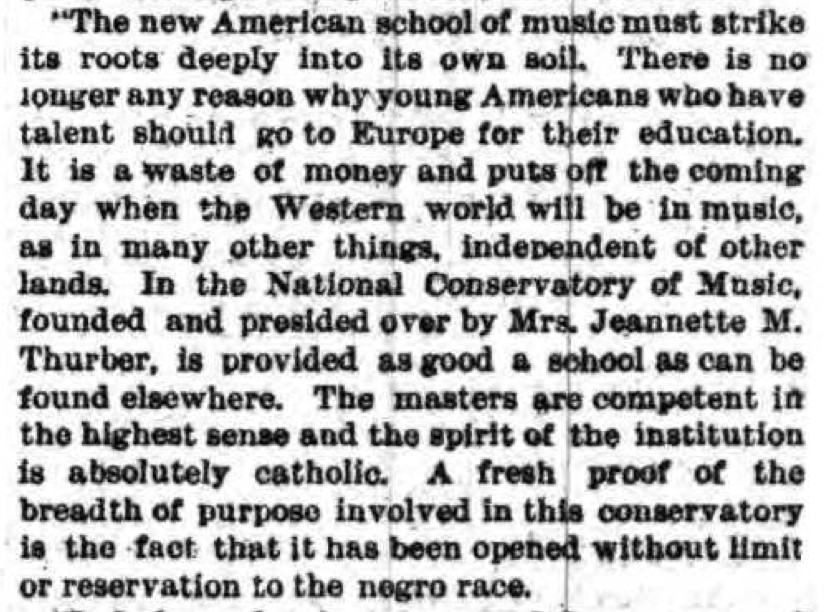 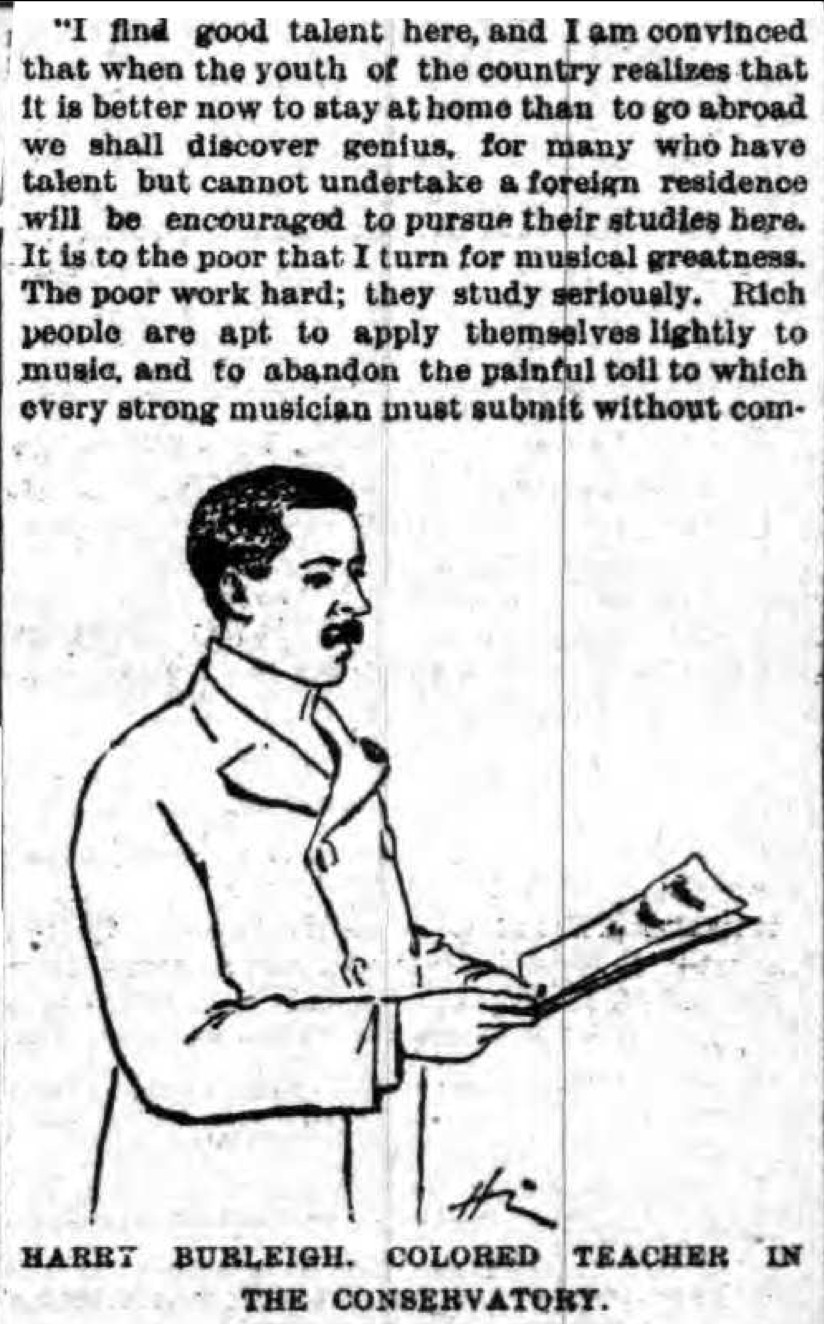 Dvořák then composed his New World Symphony (here’s a link to its very famous Largo movement) based off several spirituals, the pentatonic and blues scale – all learned from Burleigh – and Indigenous music, and it gained massive acclaim and spreading rapidly throughout the country (3). Black communities across the country absolutely adored the work, and grew to become very fond of and proud of both Dvořák and Burleigh, as can be seen in this from the Cleveland Gazette (5): 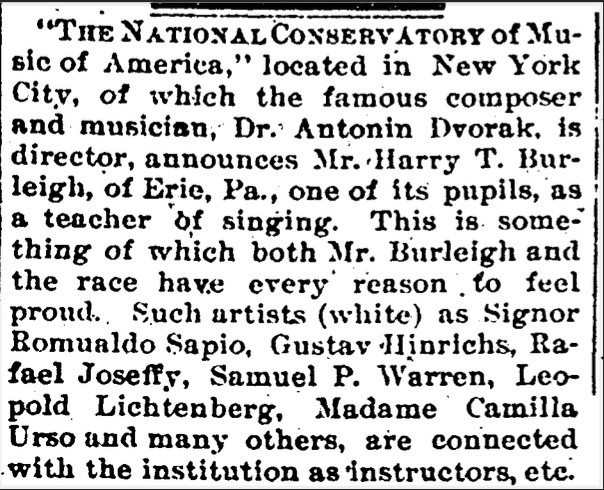 Thankfully, and radically for the time, Dvořák gave much credit to Burleigh for the conception of many of the ideas for his New World Symphony (2).

TW: Discussions of racism and mention of lynchings.

Samuel Coleridge-Taylor, the Anglo-African Composer – Mary Church Terrell Article from “The Independent …Devoted to the Consideration of Politics, Social and Economic Tendencies, History, Literature, and the Arts” 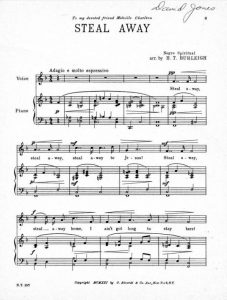 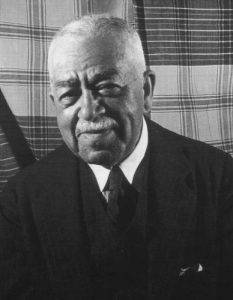 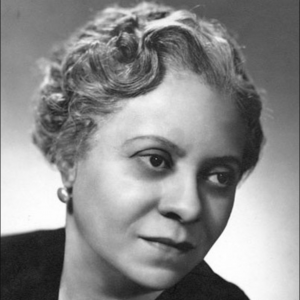