When the indigenous song collection group began our research, we found that the Smithsonian funded much of Densmore’s work. As I so clearly and forcefully lined out in my last blog post, I personally believe that Densmore’s work, funded by the Smithsonian, was a form of cultural colonialism. Much of my research here was inspired by the article “Decolonizing Ethnographic Documentation: A Critical History of the Early Museum Catalogs at the Smithsonian’s National Museum of Natural History” by Hannah Turner.

END_OF_DOCUMENT_TOKEN_TO_BE_REPLACED 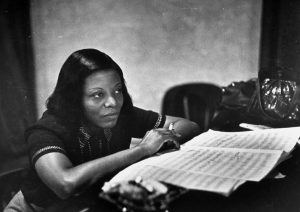 I’ve been looking for an appropriate time to talk about Mary Lou Williams in a blog post all semester. Admittedly, this blog post does not have much connection to class, but I find her music so quintessentially American; in listening to her catalogue chronologically, one can distinctly hear the progression of jazz itself. Along with Duke Ellington, she is one of very few stride pianists to make the transition into swing. More importantly, throughout her career, she maintained a strong commitment to care and activism within the jazz community.

END_OF_DOCUMENT_TOKEN_TO_BE_REPLACED

As we enter into this section of our class and begin to grapple with the complexities of Native American song collection, I really wanted to avoid talking about and uplifting white voices. However, I woke up in a “I hate Frances Densmore” mood, and decided that a bit of nuance and background might be necessary to really understand what she was trying to accomplish with her work. Furthermore, Densmore can be compared to a broader trend, the trend of white women “fighting” for Native rights.

END_OF_DOCUMENT_TOKEN_TO_BE_REPLACED

Throughout our long and complicated militaristic history, music has both shaped and reflected the public perception of the military. In my casual browsing of the Sheet Music Consortium, I began to notice patterns within the depictions of the military in both the art provided on the cover of the sheet music and the music itself, specifically with popular music written either pre or during World War I. As I dug deeper, I realized that I had seen these patterns before in the vast majority of post 9/11 country music.

END_OF_DOCUMENT_TOKEN_TO_BE_REPLACED

Scott Joplin, now considered the most premier composer of ragtime, led a complicated professional and personal life. He found extreme fame within his traditional ragtimes, including “The Maple Leaf Rag” and “The Entertainer,” however, was consistently on the poverty line, forced to sell his possessions and manuscripts. In examining newspaper articles, we can examine the public perception of Joplin and also review these writings with historical perspective.

END_OF_DOCUMENT_TOKEN_TO_BE_REPLACED

TW: Extensive use of slurs in both lyrics and titles of songs.

The last paragraph on the National Jukebox’s About This Collection reads as follows:

These selections are presented as part of the record of the past. They are historical documents which reflect the language, attitudes, perspectives, and beliefs of different times. The Library of Congress does not endorse the views expressed in these recordings, which may contain content offensive to users.

In early stages of research, I hoped to link musical traditions in modern musical theater to some of the early recordings within the “Humorous Songs” tag. However, as I scrolled, I began to notice how many of these songs were also tagged “Ethnic Characterizations.” We’ve begun to explore research and presentation of complicated data and information within this class, and I wondered how a database run by the Library of Congress would present difficult topics. I selected two songs tagged as “Ethnic Characterizations,” and examined what is missing and necessary for productive conversation.  END_OF_DOCUMENT_TOKEN_TO_BE_REPLACED

TW: Discussions of racism and mention of lynchings.

Samuel Coleridge-Taylor, the Anglo-African Composer – Mary Church Terrell Article from “The Independent …Devoted to the Consideration of Politics, Social and Economic Tendencies, History, Literature, and the Arts”