Throughout our long and complicated militaristic history, music has both shaped and reflected the public perception of the military. In my casual browsing of the Sheet Music Consortium, I began to notice patterns within the depictions of the military in both the art provided on the cover of the sheet music and the music itself, specifically with popular music written either pre or during World War I. As I dug deeper, I realized that I had seen these patterns before in the vast majority of post 9/11 country music. 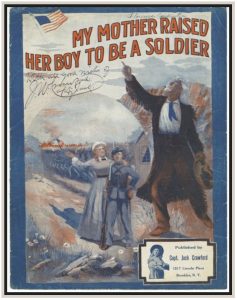 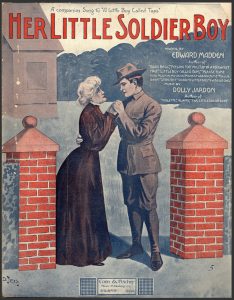 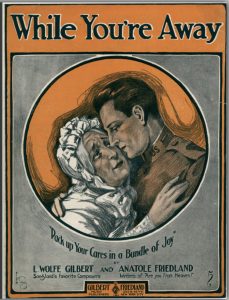 For the sake of conciseness, I’m going to focus on the lens through which these songs and their accompanying visuals portray the relationships between soldiers and the women in their lives. I found that many pre World War I songs depicted the soldiers’ relationships with their mothers as loving. These mothers are afraid to let their sons go to war, but nevertheless, proud and excited. 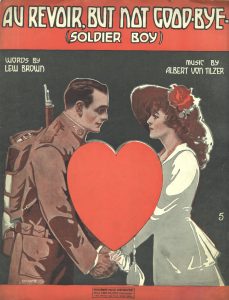 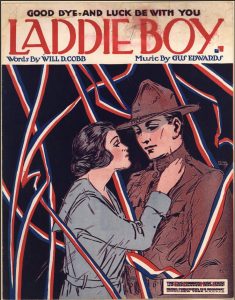 These songs also depict the soldi 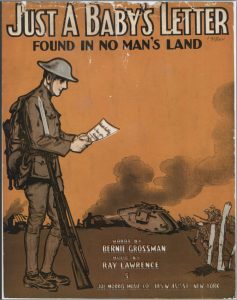 ers as sensitive romantic partners. Their small, waifish partners are left behind in their sadness and only have letters to sustain their love, and the sensitive soldier leaves with a heavy heart to do what he must to protect his love.

John Michael Montgomery song, released in 2004, “Letters from Home,” depicts a man in the army, and receives letters from both his mother and his wife.

Toby Keith, the country star who is the most egregious offender of post-9/11 pro-war propaganda, released “An American Soldier,” with an accompanying music video that depicts wives and mothers at home, desperately clutching letters and pictures of their strong soldiers.