Blackface initially used visuals to create an image of whiteness, deriving from a contrast with the Blackness portrayed on the stage. However, blackface has adapted to mass media to continue to survive through mediums like the radio. I was intrigued by a book of “new” minstrel music published in 1936 by Dailey Paskman. Paskman was a radio programmer and producer who founded the Dailey Paskman Radio Minstrels, whose popularity led them to vaudeville circuits.1 The introduction of this minstrel folio sheds light on how minstrelsy persisted through a medium without visuals.

In the introduction of his book, Paskman demonstrates his awareness that minstrelsy has changed to maintain an audience. He asserts that

“times and styles may change, but nature persists in reproducing the thoughts, the aspirations, and the accomplishments of mankind.”2

Central to this quotation is the idea that minstrelsy is part of human nature, fighting against an unnamed enemy that resists this art form. This also implies that Paskman sees minstrelsy as an accomplishment worthy of being celebrated.

Paskman continues to wage a culture war, fighting those against minstrelsy. He writes that

“the ebullient spirit of the ancient minstrel is still with us, and his modern representative has fought his battles and conquered his enemies just as securely as his ancestors.”3

This language valuing white cultural tradition comes from the same playbook as Jim Crow politicians reminiscing about the Confederacy. 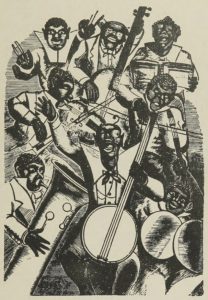 Illustration from the inside cover of Paskman’s book.

The review of minstrelsy’s evolution continues with Paskman dubbing early minstrel troupes as courageous for moving westward in pursuit of self-expression. He concludes that radio has elevated minstrels beyond the level of amateurs and has resulted in radio minstrels returning to the stage with success.4

But what contributed to that success or the persistence of the business that kept Paskman employed? Minstrelsy’s focus on audio over imagery changed minstrelsy enough to reach a new audience.

One of the reasons for Paskman’s success is the availability of an auditory audience. In 1935, the year before this book was published, over 70% of U.S. Americans owned a radio.5 Thus, a significant number of working-class people could experience minstrelsy through the radio (even during the Great Depression). 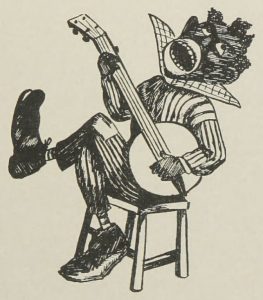 Paskman’s assertion that the radio elevated minstrelsy is accurate, and this is because of how minstrelsy had evolved. As Stephen Johnson writes, minstrelsy was the center of American entertainment for decades and never went away.6 Eric Lott expands that

“Every time you hear an expansive white man drop into his version of Black English, you are in the presence of blackface’s unconscious return.”7

Minstrelsy has always used sound to construct both whiteness and a Black other. Aware of the importance of sound in minstrelsy, Paskman utilizes “culture war” rhetoric to perpetuate minstrelsy’s popularity through aural blackface.

5 Daniel H. Foster, “From Minstrel Shows to Radio Shows: Racism and Representation in Blackface and Blackvoice,” The Journal of American Drama and Theatre 17, no. 2 (Spring 2005): 15.

6 Stephen Johnson, “Introduction: The Persistence of Blackface and the Minstrel Tradition,” in Burnt Cork: Traditions and Legacies of Blackface Minstrelsy (University of Massachusetts Press, 2012), 2, 7, http://www.jstor.org/stable/j.ctt5vk2wm.5.