Scott Joplin, now considered the most premier composer of ragtime, led a complicated professional and personal life. He found extreme fame within his traditional ragtimes, including “The Maple Leaf Rag” and “The Entertainer,” however, was consistently on the poverty line, forced to sell his possessions and manuscripts. In examining newspaper articles, we can examine the public perception of Joplin and also review these writings with historical perspective. 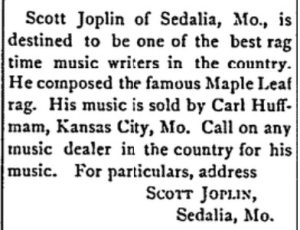 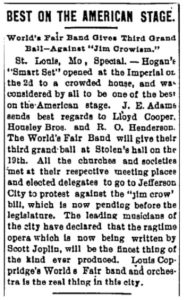 Article describing the Joplin’s opera A Guest of Honor

This article, published in the Plaindealer of Topeka, Kansas, predicts Joplin’s rise to fame following the publication of the Maple Leaf Rag. Joplin had yet to become the “King of Ragtime,” a moniker that he would later inherit.

This article from The Freeman, an Indianapolis  newspaper, references “The Guest of Honor,” Joplin’s opera. An opera company of 30 toured the opera during the early 1900s, however, nearly all traces of this opera have been lost. In what we could consider the worst streak of archival luck, during the tour, the receipt stubs were stolen, and Joplin was forced to sell his manuscript to pay for the opera’s boarding house fees. We know that this opera existed from these types of articles, however, the opera itself is completely lost.

Joplin fell ill to syphilis around 1910, and this article, also from the Freeman, references Joplin’s losing battle. While this newspaper was published in 1916, Joplin struggled with dementia related to his syphilis as early as 1914, and he was hospitalized in January 1917 and died in April.