As I was (somewhat blindly) perusing the Library of Congress prints and photographs database, I came across a collection1 of maps showing various demographic data about African Americans living in Georgia around the year 1900. The first map I came across (Figure 1) initially caught my attention because of a striking similarity to a source we looked at in class. Have you guessed what yet?

Figure 1. The very first map I came across. Look familiar?

Yeah. It’s George Pullen Jackson’s book titled “White and Negro Spirituals: Their Life Span and Kinship2.” More on that later. I decided to look at this collection of maps and the more I read about them, the more interested I became. END_OF_DOCUMENT_TOKEN_TO_BE_REPLACED

When the Fisk Jubilee Singers began to perform “slave songs” on their tours, this style exploded in popularity and was hailed as a rejuvenating form of American song. Additionally, these songs were accepted as a legitimate contribution to American music by African Americans and weren’t subject to the sort of derision that other forms of African art had been in the recent past. Unsurprisingly, many people had problems with the notion that these slave songs were the slaves own work, and numerous music critics and commentators voiced concerns that this music comprised of unoriginal rehashes of white, European descended hymnody.

Perhaps the champion of this ‘white defense’ was George Pullen Jackson (1874-1953), American folksong scholar who specialized in southern shape note singing. His belief in the need for white reclamation of spirituals coalesced most famously in his 1933 book White Spirituals in the Southern Uplands, but the most upsetting and clearly politicized version of his argument came a year earlier in the article “The Genesis of the Negro Spiritual”, published in the controversial and irreverent magazine The American Mercury. 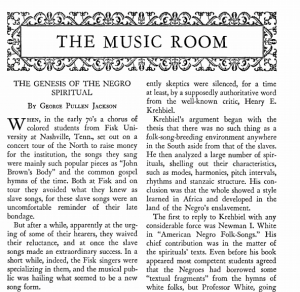 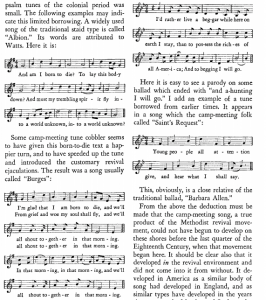 Frustrated by what he perceives as an unfair appropriation of camp revivalist songs, Jackson offers textual and musical examples that are meant to show how spirituals were updated by upland revivalist preachers and singers with “simplicity and swing”. It wasn’t until the early 1800s and the involvement of Africans in these same meetings that Jackson claims the same revivalist musical tendencies and crowd emotionalism “infected the blacks.” He also belatedly accuses plantation owners and urban Southerners “who have always been eager to forget and disown the camp-meeting songs” of obscuring the truth in an attempt to disparage poor, rural whites.

Arguably the most upsetting part of the article addresses “the chief remaining argument of the die-hards for the Negro source of the Negro spirituals – the artistic merit of these songs.” Claiming that these rural whites were as musical and as “oppressed” as their Afro-American counterparts, he effectively reduces the body of Black music he is discussing to cheap parodies of purer, more original white music. Yet despite his apparent certainty in tracing the misunderstood development of the spiritual, he concedes the vast chasm of knowledge that existed between his time and the musical era he was studying, though he seems to suggest that this chasm only manifests for those seeking to promote the “superiority” of Black music. 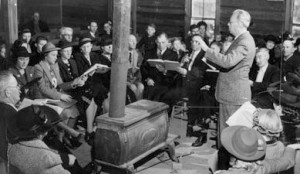 Jackson leads a group of singers in sacred harp songs in Tennessee, 1941

Jackson made a career out of the white reclamation of spirituals. Mentioned earlier was his White Spirituals in the Southern Uplands, though the misleadingly titled White and Negro Spirituals: their Life Span and Kinship (1943) is notable for its treatment of Negro music only as “variants” on white originals. Additionally, Jackson collaborated with Alan Lomax to record performances of large southern singing groups such as the Sacred Harp Singers, presumably as a more authentic representation of the southern spirituals.

While it may be infuriating to reflect upon the writings of Jackson and other anti-Black critics, it is an important part of American musical culture that should not be ignored. By critically analyzing these sources we can gain a clearer picture of how politics and cultural aggressions infiltrated American music from an early stage.

Note: For the purposes of the assignment “The Genesis of the Negro Spiritual” was discovered via the Readers’ Guide Retrospective. However, the full PDF was unavailable and was instead found at the following link: http://www.unz.org/Pub/AmMercury-1932jun-00243.