The manager of the Baltimore Museum bought an advertisement in the Baltimore Patriot on November 4th, 1831, to publicize an upcoming event, shedding light on the role of music in antebellum American society. The manager wished to advertise an exhibition that would be occurring at the museum that Saturday night at which Francis Johnson and his military band would be performing, in order that “amatures [sic] and connoisseurs in fine painting” alike would be able to enjoy “the concord of sweet sounds” of the live music.1

This advertisement reveals several details about the role of music, and art in general, in American society in the early nineteenth century. At the time, bands like Johnson’s could not distribute their music by recording. Instead, their profits came from performing live. While many ensembles, especially Johnson’s band, put on their own concerts, this article demonstrates that they also performed at events that were not necessarily dedicated concerts but simply required some musical accompaniment. Music could be combined with the experience of viewing paintings for the greater enjoyment of “amatures and connoisseurs” alike, indicating that while this was a social function, it was more about the sensory experience than about asserting the upper class identity of those who had the luxury to consider themselves “connoisseurs”. This was the same tradition of live performance that minstrel shows and vaudeville would evolve from, and the combination of different forms of entertainment in one event for convenience and accessibility actually resembles these later traditions.2 The manager of the museum describes Johnson and his band as “famous” and “excellent” and advertises that they would “perform many of the most popular and justly celebrated pieces of instrumental music”, which was a feature of much of the American concert music of the early nineteenth century. Bands and even early American orchestras would mix high-brow music with more popular and fashionable music, drawing very diverse crowds as a result.3 However, money was still a factor for the artists, and just as Johnson’s band relied on public support, the success of this museum was “so much indebted to the liberal patronage” of the public.1

By playing popular music at public events like this art exhibition in addition to their own concerts, ensembles like Johnson’s band could draw audiences from a variety of backgrounds, garnering attention for their music as well as for the art displayed at the museum. Their reliance on public support helped both institutions–that of music and that of art museums–to reach a wider audience, ultimately creating more opportunities to engage with art and in turn contributing to more widespread artistic literacy among the American public.

Although not perfect, we have come to an era in which the voices of people of color, women, and other marginalized voices have started to become more commonly represented within musical communities. It is easy to attribute this progress to the overall trend of people becoming more open minded. However, we have to remember that this progress rode on the backs of certain individuals with radical ideas. One of these ideas is that of Sylvester Russell, who writes of creating an organization that supports black musicians.

Today, I am examining an article written in the Chicago Defender in 1907 by theater and music critic Sylvester Russell. In this article, he discusses the changes that he would make to the existing association “The Colored Vaudeville Benevolent Association” (or the CYCB). 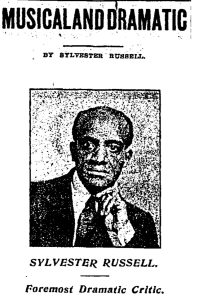 He first argues that the name of the organization is “not wisely chosen”, as the thinks the inclusion of “vaudeville” gives white people more access to the group, as it would gain attention from white vaudeville managers. He also thinks that the initiation fee of $5 should be reduced to $2 so that the association erases class issues and can include all types of black musicians and actors. He believes the only criterion should be that each member includes “all actors who are making a living as professional entertainers”. He also wants to include women in the association. He believes that by having an association that supports black actors and musicians in Chicago, it is possible that Chicago could become the center of arts for Black Americans.

The idea of creating a union of sorts among a group of people is not shocking. However, I think this column by Russell raises an interesting point about the ways in which black performers and managers were well aware of white influence and sabotage. Russell talks about the importance of how the members of this association present themselves. He argues that “The white man is ever on the bright side of natural instinct, and if actors who belong to this organization are not very careful of what they do and say along certain lines, their individual errors will tend to make the body weaker”. In other words, he thinks that the members of the organization must be savvy in order to keep the power of this organization between people of color.

Russell gives us a good reminder that progress has only happened because of individuals who have thought meticulously about how to keep power in the hand of POCs, careful to not let white people take it away.