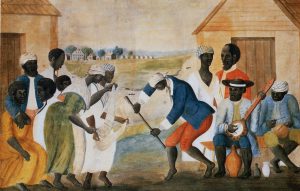 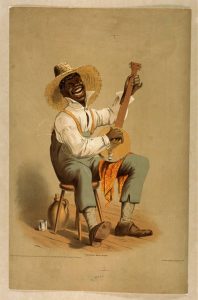 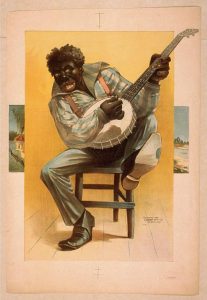 I have to commend Henry Granger Hanchett, a musician, doctor, and lecturer, on one thing: his choice of title for this piece, which was published in The Outlook (a New York magazine) in 1896. Posing the question, “What is ‘Good Music’?” in the title of an article implies to me that the author intended to answer that question to some degree of certainty within approximately one page, something most authors would be cautious of. In fact, Hanchett appears to have had few reservations about answering such large musicological questions, having also written during his lifetime a book with the title, “The Art of the Musician. A Guide to the Intelligent Appreciation of Music.”

In this particular article, “What is ‘Good Music’?”, Hanchett explores typical themes such as church music, the purpose of music, personal tastes, the roles of instruments and performers, and so on. However, what I found to be the most telling about Hanchett in this article, as well as the role of race and identity in his musical opinions, were his offhand comments about “Gospel Hymns”. He uses the example of the song “Way Down Upon the Suwanee [Swanee] River” being performed by a beloved opera singer, Christine Nilsson, to illustrate that even the most inferior compositions can be made into good music through a virtuosic  performance. In the midst of an article otherwise dominated by a casual and exploratory tone, Hanchett shifts to an exasperated condemnation of what he believes to be gospel music. He describes these “Gospel Hymns” as “not really worth the paper upon which [they are] printed,” having “no musical sense or meaning,” and overall, “not good music.” 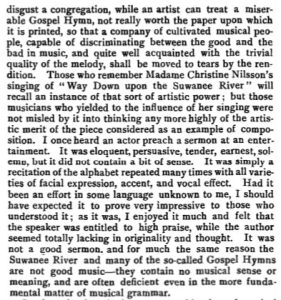 As I attempted to get a clearer understanding of what Hanchett’s definition of a “Gospel Hymn” was, I searched for recordings of “Way Down Upon the Swanee River” (also called “Old Folks at Home”). This immediately led me to a video of Al Jolson, a popular minstrel show performer in the 1900s, performing the song in blackface in the movie Swanee River.

Diving deeper into the background and the lyrics of this song, it turns out that “Way Down Upon the Swanee River” is, in fact, a minstrel song written by Stephen C. Foster (and currently the Florida state song??). In addition to being written by a white guy for other white guys in blackface to perform, the song makes no reference to religion or the gospel. I may not know a perfect definition of what a Gospel Hymn is, but I’m pretty sure that this is not it. All available evidence leads me to assume that Hanchett hates this particular song, as well as the musical style, not because it is rooted in the racist practice of minstrelsy but because he actually perceives it to be genuine Black music and he’s just super racist. Although Henry G. Hanchett had his knack for musicological confidence, behind that confidence was the privilege and ignorance that make his opinions irrelevant today. 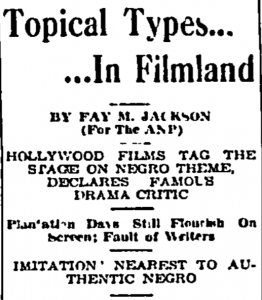 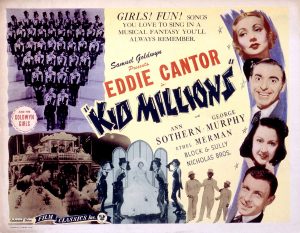 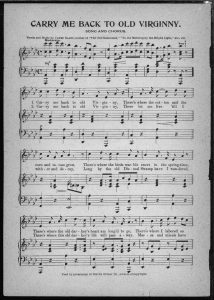 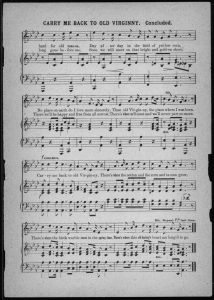 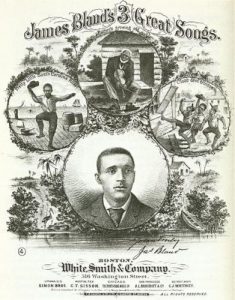