After searching a bit on the database, I stumbled upon a document called, “Plea for Negro Folk Lore,” published as the Freeman on January 27, 1894. In this article, author Miss A.M. Bacon argues that within a handful of years as of the publishing of this article, the history of black Americans would dwindle, and be reduced to nothingness-completely assimilated

into society with no traditions, beliefs or ideas from the past. The thought that the new generation was not aware of the sufferings of their ancestors is frightening. To combat this rising problem, the author suggests the history of black Americans, specifically enslaved black Americans to be meticulously collected. Likewise, she argues that such knowledge must be collected by intelligent and educated black scholars in order to accurately inform from their own experience. Bacon numbers the types of information that must be collected: Folktales, customs, traditions, African words surviving in speech or song, ceremonies and proverbs. Through collecting these items, the history of black Americans can be compiled, so that everyone knows the struggles of the past.

One of the best ways to explore the past of black Americans is through the surviving words through speech and song. While people had recorded spirituals at the time, Bacon focuses on different kinds of songs. She references utterances, both musical and rhythmic. Further on, she poses the question to her audience of primarily black Americans, “What are your people singing about – for they are always singing – at their work or their play, by the […] or in social gatherings?”1 Bacon presents a clear call to action to notate such music, as it is these songs that contain the history, life and identity of the black American.

As someone who is currently studying musicology, one of the main tasks required of me is to use music as a clue to make larger claims about society at that time. In other words, I sleuth around in musical documents to figure out how people thought. Just like any primary source, music leaves us a trail that can bring us to bigger discoveries about human nature. So this week, I decided to embark on the task of using musical documents to bring light popular sentiments about black Americans.

I decided to take a closer look at this document: 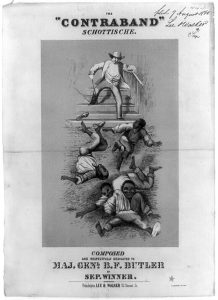 (It’s a little blurry here, so take a look here for a clearer picture: https://www.loc.gov/pictures/resource/cph.3b35698/)

This is a sheet music cover for a piece titled “the Contraband Schottische” written by Septimus Winner in 1861 (the beginning of the Civil War). Winner dedicated this piece of music to Union General Benjamin F. Butler. Butler was in charge of implementing the “Contraband Decision” in which escaped slaves who retreated to the North during the Civil War were considered “contraband” or illegally stolen goods. This allowed Slaves to live in a state not being owned but also not being free in the North. This was decided in retaliation to the Fugitive Slave Act of 1850 in which slaves were to be returned to their masters if caught after escaping.1 On the cover of “the Contraband Schottische” there is a cartoon depicting a slave owner chasing his four black slaves rolling down the hill as if they are merely goods. Although the Contraband Decision ended up being a helpful decision for slaves as a side effect, we can’t sit here and celebrate Butler, he wasn’t even an abolitionist after all.

The depiction of slaves in this cartoon gives us an inside look into some of the attitudes held by society at the time. In this cartoon, slaves are illustrated to be synonymous with products or goods, as they are rolling down the hill like a sack of potatoes falling out of an 18-wheeler.

This sentiment of black Americans being treated as “property” or “goods” seems to infiltrate and inform other assumptions about their intellectual ability or identity as functioning humans. If we fast forward to 1943, this idea develops into another held by author George Pullen Jackson in his book White and Negro Spirituals. He holds the belief that black Americans are not capable of producing sophisticated spirituals, and therefore, must have developed all of their music from the influence of Europeans.

“We know that our fathers (Europeans) brought to this land a rich and hoary heritage of folk melody. We know that the negro slave entered into this heritage eventually by adopting it to the extent of his ABILITIES and desires”.2

This quote infers that black Americans would not have the ability to create music as sophisticated as Europeans. By looking at these documents surrounding music, we can see that the sick attitudes of black Americans as “goods” or “property” and the conclusion that they therefore can not produce sophisticated music are rampant for over a hundred years. That’s pretty disgusting.