On Easter Sunday, 1939, Marian Anderson performed on the steps of the Lincoln Memorial, to a crowd that filled the National Mall.

Some might be familiar with the history of her journey to this performance. Barred from playing Constitution Hall by the “white artists only” policy of the D.A.R., Anderson’s representatives, Howard University, and the NAACP fought for her right to perform in DC. After years of negotiations and protest, they turned to the idea of an outdoor concert, somewhat out of frustration, and the iconic performance began to take shape.2

Anderson was already world-famous by this time, but this performance secured her place in the American musical identity arguably more than any other. The construction of such an identity, and the role Black Americans should have within it, was a defining cultural characteristic of this time period. The Black artistic community was actively engaged in shaping not only their musical identity separate from the white people around them, but in fighting for their rightful place in the growing commercial and artistic worlds of American music. And the arts, accordingly, were being used (and co-opted) to make arguments about social equality. This cultural landscape resulted in some essentialism and some elitism among Black intellectuals, and Anderson’s career was certainly touched by this; her renown puts her in W.E.B. DuBois’ talented tenth, and her professional work was considered representative of the whole African-American community and used to assign greater value to those peoples in the eyes of whites. For evidence of this, one need only look at this educational poster, which leverages her talent to make an implicit argument for racial equality. 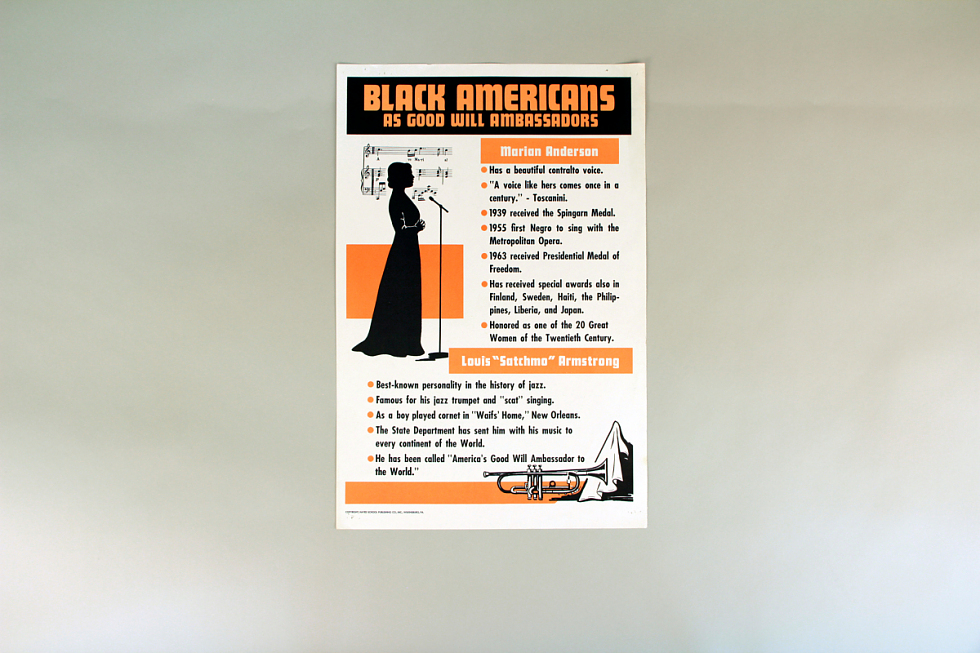 From the Smithsonian National Museum of American History3

Her performance of “My Country Tis of Thee” on the National Mall relates her career specifically to the musical construction of Americanness in the 20th century. And this poster is a perfect example of Black talent being leveraged in civil rights debates. Now, of course the arts can and should be a vehicle for social messaging. But how did Anderson feel about the civil rights implications of her performance and the way it was interpreted in the following decades?

This particular rhetorical question actually has a fairly straightforward answer: she never intended the concert to be a statement or a fight. Anderson wrote on page 187 of her autobiography that she “felt about the affair as about an election campaign; whatever the outcome, there is bound to be unpleasantness and embarrassment . . . [which she] could not escape,”4 and one of her most respected biographers describes the situation thus: “the symbol that she was being made to represent was not of her own choosing and this made her feel ashamed and unworthy, even defensive.”5 In short, she didn’t want to be a civil rights crusader, but being Black in America meant (means?) she couldn’t simply be an artist without being associated with that fight. Throughout her career, people persisted in this unwilling association of Anderson’s voice, her art, her blackness, with a political message. Even worse, her voice was later appropriated by the government to reach out to Black communities via an appeal to civil rights activism. Her performance is used as a call to action for Black citizens in this poster from the 1990 census: 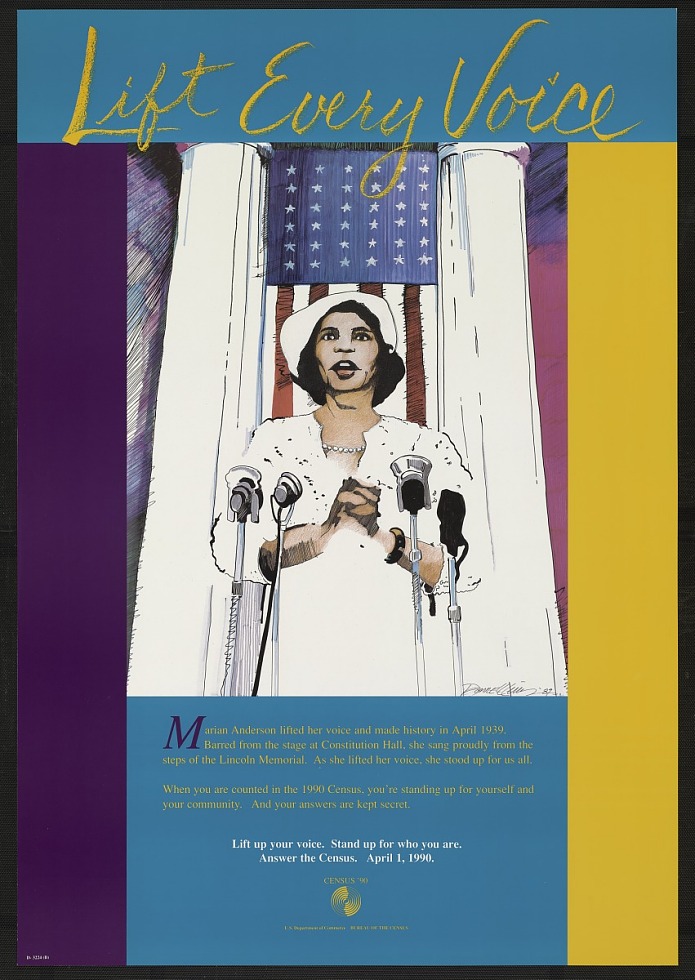 From the Smithsonian National Museum of American History6

The patriotic effect is augmented by the use of the American flag and the phrase “Lift Every Voice” – colloquially, the black national anthem – as a focal points of the poster, correlating Anderson’s blackness specifically to a sense of “Americanness.” The appropriation of Anderson’s performance for political ends, however noble those ends might be, raises questions about artist intention. We know none of that was her intention. But since music can’t exist in a political vacuum, how can we separate Anderson’s intentions for her art from those of the people around her? Should we do so? Moreover, is it at all appropriate or ethical for Black talent to be appropriated by the government that’s done Black communities so much historical and present harm? To the last I’d simply say no, but the other two are genuinely open questions. Political music should be looked at with a critical eye, of course, but so should music that was appropriated for political purposes. There is more to the story of any artist than one particular political message they’ve been associated with.

4 Anderson, Marian. My Lord, What a Morning. Madison, WI: The University of Wisconsin Press, 1956.

In my research of black minstrel troupes, it has become obvious that American pop culture is infused with references to minstrelsy. Although this influence becomes obvious when it is pointed out, I would like to propose a claim that might not be as readily accepted. Not only is minstrelsy heavily involved in American media, the influence of the minstrel show is a pillar of American art and media. In other words, elements of minstrelsy actually contribute to what it means for a piece of media to be “American”.

This article posted in the the Freeman in Indianapolis, Indiana on February 8, 1902 titled “The Negro Performer Abroad” explains how the minstrel show was not well received abroad. The article writes: “The English and Australians, by the way, are very austere and reserved as regards the manner of entertainment of histrons, therefore that which we here consider clever, they, over there regard indifferent and treat with almost heartless disdain. Little wonder then that early Negro minstrels met a cold reception and proved a ‘frost’”. 1

This indifferent reception shows us the extent to which American media and humor differentiated from that of Europeans and Australians. In other words, this humor is strictly American.

We can see this inclusion of minstrel influences as well in other forms of media such as animation in more sinister, more blatant ways. For example, in Ammond’s book “Birth of an industry: blackface minstrelsy and the rise of American animation” he argues that certain characters, such as Mickey Mouse, carried “all (or many) of the markers of minstrelsy while rarely referring directly to the tradition itself”. 2 For example, in this video of the first Disney animation “Steamboat Willie”, we see that Mickey is whistling a minstrel tune and also wears the distinctive white gloves worn by minstrel performers.