Bach and Handel had the same eye doctor (who botched both their surgeries). Brahms went to a tavern called The Red Hedgehog every day. Debussy loved cats.

Sometimes we need to be reminded that the musicians we worship did not just compose, play, or sing. They were just like us. They had lives, they had other interests, and, in Mahalia Jackson’s case, they had fried chicken.

In 1968, Jackson, still at the height of her singing fame, started a fried chicken chain in Chicago, meant to be the black counterpart to country comedian Minnie Pearl’s own chain as well as a competitor to Colonel Sanders’s rapidly expanding Kentucky Fried Chicken. Though we now claim Jackson as part of our shared American musical heritage, the intended audience for this chain implies a more limited role for Gospel music in the 1960s. As an article in the African-American newspaper The Chicago Defender noted, the chain was “black-owned, managed and staffed and is hiring in the communities in which it operates.”

In this way, the chain was most definitely a product of the 1960s. In the midst of the Civil Rights Era, less than 15 years after the ruling in Brown v. Board of Education declaring segregation in public schools to be illegal, integration was still in progress. Black and white restaurants and neighborhoods, though not legally segregated, existed (and, in fact, still exist today).

I don’t blame Richard Crawford for not including this story in our textbook, “American Musical Life.” There’s only so much you can include, and, however much I might like to say otherwise, knowledge of Mahalia Jackson’s Glori-Fried Chicken is not essential to understand Gospel music. But stories like this one put history in context and show the humanity and depth of musicians. They are people, just like us.

Go grab some fried chicken and enjoy a performance by the Queen of Gospel.

Shape notes are a style of music notation most popularly printed in the songbooks of The Sacred Harp, and is categorized as sacred choral music. Shape note singing originates in the New England region of America as way to help illiterate Americans read music and participate more freely in religious activity. This style of si 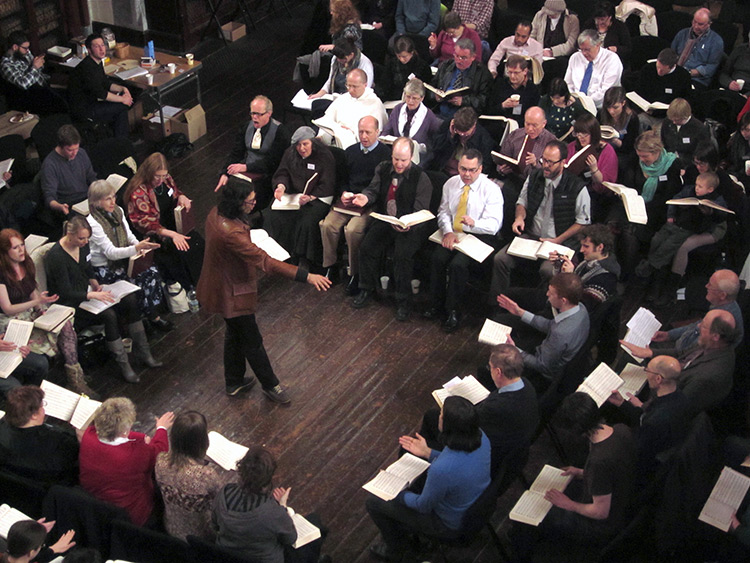 nging was mainly found in the Protestant sect of Christianity. Shape notes reinforce the importance of congregational style of singing in church, allowing for a broader inclusion of church-goers.

The first iteration of shape note notation, invented by Psalmodist Andrew Law, was meant to simplify singing by assigning different shapes to different syllables (fa, sol,  la, and mi) so that singers knew which syllables to sing without needing to read lyrics. In 1801, the system was developed by William Little and William Smith and assigned these shapes to different pitches on a staff. This resulted in the creation of The Sacred Harp tunebook. In an article posted in the Common School Advocate in the year 1838, the tunebook was regarded as “decidedly the best and most permanently useful work yet published… made up of the finest compositions of the great masters of ancient and modern times, with new music.” A review that pays homage to the times, as this was a fairly new invention that gave a church goers a new and inclusive experience participating in the singing of psalms and hymns.

A popular hymn that is sung today that The Sacred Harp transcribed into shape note notation is “Amazing Grace.” Largely sung at funerals, this originally baptist tune transcribed in shape note notation is a great example of the choral music of the Antebellum south period. The Christian Observer, an Anglican evangelical periodical that existed between 1802 and 1874, wrote highly of the Sacred Harp tunebook, posting numerous recommendations of its publication. One that particularly stood out, read “ 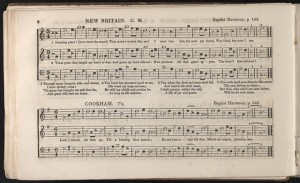 The volume is composed of very beautiful melodies; and harmonies of almost unequalled richness… The tunes are admirably adapted to the effective expression of poetry, a circumstance upon which the happiest effect of Christian Psalmody depend.”  A boasting review of a simple style of music, which goes to show the nature of music during this time period in America. Neither monophonic nor polyphonic, this unique style, which is heterophonic in texture, has a surprising sound that is unfamiliar, even to a trained ear. The more popular hymnody has a far more recognizable polyphonic texture that most trained and un-trained ears are accustomed to.

At the annual conventions, there is a specific structure to how they sing each song, whether or not that is how it was performed in 1850 is unbeknown to me, but the format is as follows: “sung through once on the solfege syllables, then sung in its entirety, with the final phrase repeated as a conclusion” (Miller). Despite the repetitive nature of such singing style, the participants are very enthusiastic in their singing of such tunes, and often clap and stomp along with the beat. Through shape-note singing a community emerged, one that is based around the Protestant faith, but is much more than that.