The World’s Columbian Exhibition, better known as the Chicago World Fair, in 1893 is often lauded as a premier exhibit of innovation and culture. However, the fair presented a stark contrast between what exhibition organizers deemed the civilized white culture and the uncivilized “Other”.

The Carlisle students served as an example to the American public of the “civilized” American Indian. (“Snatches from Comments of Various Prominent Papers on the Visit of the Carlisle School to the World’s Fair in October” in Ely Samuel Parker Scrapbooks, Vol 12, edited by Ely Samuel Parker. Accessed February 15, 2018.)

Ely Samuel Parker, a Seneca-born American Indian and Commissioner of Indian Affairs under President Grant,1 included in his scrapbook collection quotes on the Carlisle School’s visit and performance at the World Fair. The Carlisle School, located in Pennsylvania, was a boarding school dedicated to erasing any semblance of Native American culture: language, clothing, hairstyle, and behavior, by taking young Native Americans away from their homes and families on the reservation. As the school’s founder, General Richard Pratt, famously said, the school sought to “kill the Indian, save the man”.1

The arrival of the students, as noted in Parker’s newspaper clippings, served as a stark contrast to the Native Americans in the Midway Plaisance. While in class, we discussed how the World’s Fair gave Native Americans in the Midway Plaisance more of an opportunity to present their culture, music, and dance from their own perspective, the Carlisle students demonstrate how the dominant American culture tried to stamp out Native American culture and treat it as “Other”. The newspaper clippings in Parker’s scrapbook serve as an example of how Americans believed that Native Americans could be civilized. They celebrate what they believed to be accomplished civilization. The article notes that the Carlisle School band of 32 instruments and choir, dressed in uniform, closed their performance with the playing of the American National Anthem at the time, “America” or “My Country Tis of Thee”.Leaving behind the drums and shakers as heard in the Native American music in class, the students picked up trumpets and trombones.Newspapers celebrated what they deemed a triumphant display of American Indian civilization. A passage from the Dubois, Pennsylvania Courier noted, “That it will be of use in showing us…that they are not outside the pale of civilizing influence, is also certain”.1 Although some musicians tried to preserve or appropriate Native American music in the late 20th century, the Carlisle School’s performance at the World Fair demonstrates the dominant culture’s determination to stamp out what they considered the “savagery” of Native American culture, including music.

“Snatches from Comments of Various Prominent Papers on the Visit of the Carlisle School to the World’s Fair in October” in Ely Samuel Parker Scrapbooks, Vol 12, edited by Ely Samuel Parker. Accessed February 15, 2018, 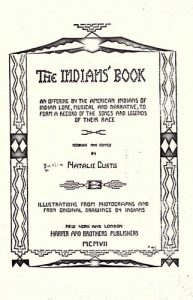 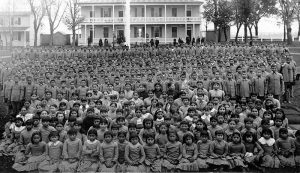