Music is a multifaceted art form that intersects with many other forms of expression and has both a creative and cultural importance to many Native American communities. One prolific intersection, especially in Native American cultures, that exists is that of music and dance. In some of the earliest entries from European explorers, their experience with native tribes comes hand in hand with music and dance.1 One of the issues we have talked about in class is the appropriation and misuse of Native American cultural practices. This is not an issue that exists solely in the realms of music and other object-like representations. Within many European cohorts “American” dance was seen as something exotic, a form of entertainment that was both culturally intangible to them yet consistently available for general consumption.2 Unlike with Native American songs the technology to record the movement of dance was not widely used until the 1950’s. This meant that the visual representations of dance, outside of live performances, was concentrated in the lens of photographers. 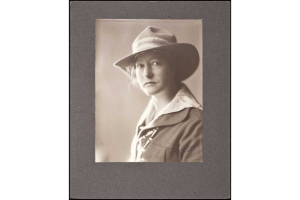 Emma B. Freeman was a popular American photographer during the late 1910’s.

Emma B. Freeman was one such photographer. Freeman’s work concentrated on stylized portraits of indigenous people, culture, and fashion. She was a relatively controversial artist in that she was not always consistent in her portrayal of specific tribes and groups of people.3 She would accidentally mix, match, and generalize certain aspects of the tribes she was studying. Music and dance were both subjects she played with at times, documenting ceremonial dancers lined up before a dance. She also introduced musical instruments into the portraits of unmoving patrons. 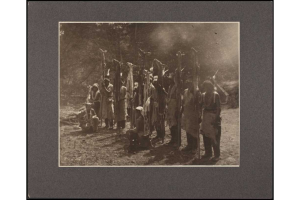 Dancers from the Hoopa tribe. 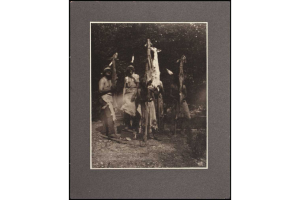 Members of the Klamath tribe preparing for the white deer skin dance.

Emma B. Freemen’s style idealized the Native experience and tokenized their appearance through objectification. This stands as an example of the balance between appropriation and preservation and shows just how complicated the intersection between art and representation can be.