Contemporary folk is a broad genre, stretching out into indie folk, indie rock, americana, you name it. However, when I think of this genre and the especially famous artists that dominate it, I can’t think of any black artists or bands. There might be a couple Asian American artists, but the genre comes across as very white. Take the Avett Brothers, for instance: one member was born in South Korea, and the rest are white. And their audience is even whiter.

Described as a folk rock band, the Avett Brothers are seen here, playing guitars and singing in front of a picture of a tractor, which are common aspects of country music. Country and folk have similar sounds, so it would make sense for the folk of today to have adapted from the country of days gone by. If one listens to “Monterey” by the Milk Carton Kids, an indie folk duo, it’s possible to hear the calming guitar and harmony influences of songs like “Driftwood” by the talented Merle Haggard, who claims influence from the man deemed as the first famous singer in the genre, Jimmie Rodgers.1 People could assume folk and country are white today because it’s always been that way. However, that is not the truth.

Even Jimmie Rodgers mixed his voice and instrument with the beyond legendary Louis Armstrong and his wife Lil Hardin Armstrong, singing “Blue Yodel #9”, but it wasn’t as popular.2 When John and Ruby Lomax traveled around the South in 1939, they stopped in a jail and recorded Roger “Burn Down” Garnett singing “Eaton Clan”.3 He played guitar and sang, echoing previous country and folk artists, but he did not receive much recognition beyond the recordings conducted by the Lomaxes, as he was in prison. Yet, other folk artists, sometime between 1938 and 1950, were performing at the Mountain Music Festival, and they were white. 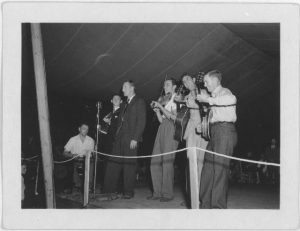 Five musicians and a singer performing at the Mountain Music Festival, Asheville, North Carolina. Between 1938 and 1950. Lomax Collection, Library of Congress, Washington, D.C.

So if country and folk artists have always been black and white, how come white artists are the ones to be recognized? Jeffrey T. Manuel explains the phenomenon as having been created by the music industry making a conscious effort to attribute the sound of folk and country to the social group of the white, Southern middle class. Rhiannon Giddens backs this up with the fact:

The music industry made sure to keep race records separate. If music crossed color lines, segregation would be disregarded. Therefore, white artists rose to the top, and black artists faded into the background.

Although erasure of black artists has been a real issue for the longest time, music can’t help but be heard by anyone and everyone. The influences of country and folk music, black and white artists, continue to spread. Now, I can’t think of any famous, black, contemporary folk artists at the top of my head, but perhaps we should be able to think of some. Because black americana is real too.