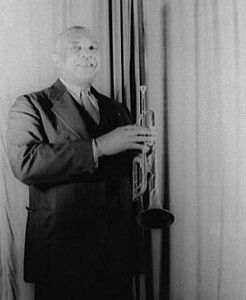 Widely acclaimed as “the father of the Blues,” William Christopher Handy experienced humble beginnings. Handy grew up in a log cabin in Florence, Alabama to former slaves. His father, a preacher, believed that musical instruments were tools of the devil and did not support his son’s musical endeavors.

As a teenager, Handy went against his parents’ wishes and secretly saved up to purchase a cornet by picking berries and nuts and making lye soap; he then joined a local band and spent every free minute practicing it. His troubles worsened after his band Lauzetta Quartet disbanded and he spent two years in St. Louis living under a bridge, homeless.

He would later reflect on his early days saying, “You’ve got to appreciate the things that come from the art of the Negro and from the heart of the man farthest down.” 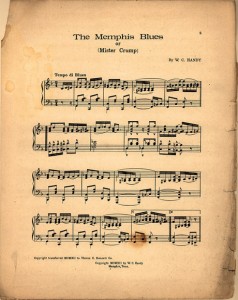 In 1909, Handy self-published his song “Memphis Blues” while working in several clubs on Beale Street. Since then, the term “memphis blues” is used in lyrics of other tunes to describe a depressed mood.

“The Memphis Blues” is said to be based on a campaign song written by Handy for Edward Crump, a mayoral candidate in Memphis, TN and so is subtitled “Mr. Crump.”

For the 1914 recording of “Memphis Blues” by Morton Harvey, tenor, click the link below: http://www.loc.gov/jukebox/recordings/detail/id/117

The song introduced his style of 12-bar blues and is credited with inspiring the foxtrot dance step by Vernon and Irene Castle, a NY dance team. When Handy moved to New York City, his hit songs “Memphis Blues” along with “Yellow Dog Blues” and “St. Louis Blues” brought Handy’s musical style to the forefront of mainstream American culture.

By moving from Tennessee to New York, Handy was able to spread the Blues to the epicenter of music during the early 20th century. His struggles during his early days allowed him to draw on his tribulations in order to create a genre of music America could call its own.

For more information on W.C. Handy’s life and music, check out this documentary!