In February 1916, the Tuskegee singers were recorded singing “Swing Low, Sweet Chariot” in Camden, NJ. The spiritual is part of a rich history of Black musicking in America, a tradition that incorporates African folk, Christian hymnody, and Native American musics, among other influences, and has been made possible by Black resilience, ingenuity, and artistry despite the circumstances they as a people have faced in America. Uplifting this art and its creators was a primary goal of the Harlem Renaissance. Which was just beginning in 1916, when this recording was made.1 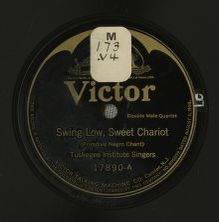 The image of an RCA Victor record presented in the catalog entry for the Tuskegee Singers’ 1916 “Swing Low, Sweet Chariot” recording.1

The session was organized by Victor Talking-Machine Company (today, RCA), and their role in the musicking process here became quite interesting to me after I found the catalog entry for this recording in the Library of Congress’ National Jukebox. The intentions of Black artists in the Harlem Renaissance are clear – they are well documented in writing by the artists themselves – but what about the intentions of recording companies who facilitated recordings such as this one?

According to its Library of Congress catalog record, the recording was part of an educational effort by the record company. The label “educational” was applied to folk music from all over the world, including White musics, so at first glance it doesn’t seem to be an expression of othering. In fact, it may even speak well of the company that they went out of their way to include Black art in educational efforts. However (and this is a big however), the fact that the recording’s official subtitle is “Primitive Negro chant” paints a much more concerning picture of the company’s engagement with and recording of BIPOC art. While “Swing Low, Sweet Chariot” and the Black spiritual tradition may have originated primarily in the fields of forced labor rather than in the concert hall, this recording definitely constitutes art music. It’s a presentation of Black folk material that is much more compliant with Western European musical traditions. Other presentations of such material – think Dvorak – were respected and embraced by white audiences at this time, certainly not called “primitive.” Now, there was definitely othering, fetishizing, and appropriative behavior that underlied those white audiences’ love for art music based in Black traditions. But the fact remains that they loved the material and loved it as art music.

The choice of language is extremely reductive, then, implying that spiritual art-songs are somehow lesser than other art music, and it indicates serious disrespect for Black creativity. Given the positive reception of Black music when it was appropriated and presented by a white composer, one can only conclude that the devaluing of the spiritual tradition evident in the “Swing Low” recording was a direct result of disrespect for the Black composers and performers involved in this performance. Considering the power record companies hold in marketing and branding the recordings they produce, prejudices like this, and subtitles like the one on this work, cannot be ignored. Companies have the power to perpetuate stereotypes and shape societal value systems, and they do it like this, through language that either explicitly or implicitly reduces BIPOC musics to “other.” In musicology and as we consume music in our daily lives, we ought to be cognizant of branding and the hidden power of the people who control recordings. Marketing matters.