During the Great Depression, the United States government took action to provide work for the unemployed musicians (70% of American musicians) that had been displaced by falling audience attendance in venues around the country. In 1935, the Works Progress Administration’s Federal Project Number One implemented relief for musicians with the Federal Music Project. The Federal Music Project employed musicians to perform in both concert and folk/dance settings, teach lessons, and conduct musicological research. The Works Progress Administration was the first instance of government funded music in the United States, and this shift in the way the country approached music affected both the music being made and the relationship between composers, audience members, and, as the letter below reveals, critics.1

In the following open letter from Aaron Copland, Copland clarifies the reasons for the intended conference between critics and composers at the Yaddo Music Festival and chastises critics for failing to attend: 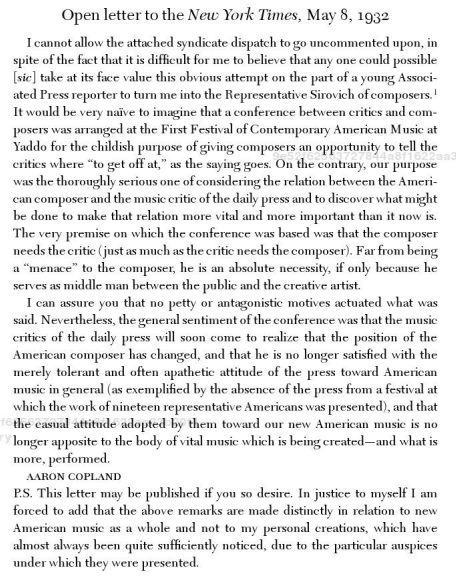 Though this letter dates three years prior to the implementation of Federal Project Number One, Copland was already beginning to articulate the changes that were happening in American music. By the mid-1930s, Copland himself was transitioning into his fourth stylistic period which incorporated recognizable melodies into a major-minor tonal system in an effort to garner widespread appeal.2 Copland made the shift from abstract music to accessible music during this period because the Depression made audience appeal a significant factor in composing music. If music was to survive the Depression, it needed an audience to do so. Thus, composers like Copland sought to create music that the general public would deem valuable enough to listen to.

In Copland’s letter, he calls upon critics to play their role in the transmission of music from composer to audience. The following excerpt best captures his frustration with critics for their failure to adapt to–or even recognize the need to adapt to–the changing musical climate of the United States:

Our purpose was the thoroughly serious one of considering the relation between the American composer and the music critic of the daily press and to discover what might be done to make that relation more vital and more important than it now is . . . . [the critic] is an absolute necessity [to the composer], if only because he serves as a middle man between the public and the creative artist. . . . music critics of the daily press will soon come to realize that the position of the American composer has changed, and that he is no longer satisfied with the merely tolerant and often apathetic attitude of the press toward American music in general . . .3

With these words, Copland is saying that the music industry can no longer afford to be neutral towards the role the audience plays. He does not ask critics to manipulate their reviews in order to purvey American music to the public (in the sense of propaganda), but he does encourage them to have more of an opinion about American music, presumably  to incite discussion, curiosity, and even knowledge of American music among potential audience members. Critics were integral to garnering interest for the changing American music scene of the Depression era, and Copland calls on them–as he called upon himself–to ensure that American music would have a lasting future.

1 Richard Crawford,”‘The Birthright of All of Us’: Classical Music, the Mass Media, and the Depression,” in America’s Musical Life: A History (New York: Norton, 2001) 590.