Photo courtesy of Library of Congress

Robert Nathaniel Dett (1882-1943) was a popular African American composer who used spirituals and gospel songs as his inspiration for larger works. His works like the Juba Dance were performed by the Tommy Dorsey Orchestra, and Dett conducted and performed as a pianist in Carnegie Hall.

His 1937 oratorio, “The Ordering of Moses,” was seen in its time as controversial, but largely lauded. It was called “the most impressive Negro contribution to music” in the Chicago Defender‘s May 1937 issue. It combines “spirituals such as “Go Down Moses,” reworked into a fugue; the lush romanticism of Dvorak; a seguidilla-like dance complete with castanets; and jazzy inflections throughout.”1

When it was originally performed at the May Festival of 1937, the live recording on radio suddenly stopped midway through, supposedly due to scheduling difficulties, but in later years it is largely believed that too many people called in complaints about the composer’s race for the broadcast to continue. Dett faced much discrimination for this work, and he felt it on both sides. He was told his symphony was too black, and that he was too black, but other people told him it wasn’t black enough. Critic Olin Downes of the New York Times had this to say: 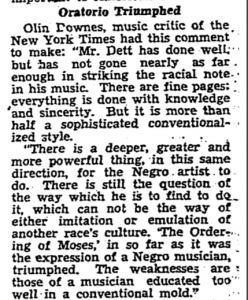 Image Courtesy of The Chicago Defender May 1937 Issue2

The oratorio can be heard in this playlist below. 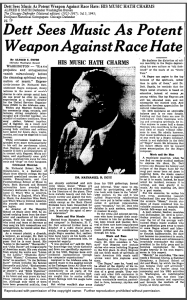 In addition to creating large-scale works that provoked conversation, Dett made plenty of statements about the difficulties of black composers in a largely white-dominated field. At that time, spirituals when composed and sung by white performers was more acceptable than black people doing the same thing, and Dett made it known the many problems that accompanied that mindset.  In the July 1943 edition of the Chicago Defender, he is quoted saying that black composers and performers should not try to confine to the popular, white and westernized version of songs that were originally from the black community in the first place. He also notes that the black community should “aspire to the top because of spirituals, not in spite of them.”3

Additionally, Dett mentions the difficulties of being a black person in the institutional music system. He says that many African Americans who graduate from insitutions with degrees in music aren’t able to fully cultivate their talent, because if they rise to fame they outshine even the president of the institution (on account of the novelty of being a famous black performer).

Dett’s work “The Ordering of Moses” contradicts his own statements in two ways. First, it conforms more to western European musical standard practices than to traditional practices in the black community. This is something he directly condemned above. Second, it helped him rise to great fame, rather than let him meekly compose semi-successful pieces. However, he did not seem to outshine the reputation of Oberlin University, where he obtained his degree.

There is more to the story, however. If his work had conformed even more toward traditional spiritual practices, white audiences never would have heralded it as such an inspiring and important piece. Then, he might not have gained as much fame and thus wouldn’t even have had an opportunity to share his opinions on the state of black composers and performers in the Chicago Defender. He played the game where he had to in order to balance both black and white audiences. If he hadn’t, he’d have been lost to history, and we wouldn’t remember his works or his name. So before we are too quick to judge the contradictions between his composition output and his musical philosophies, we should remind ourselves of the complex situation of being a POC in America. This should especially be taken into account regarding black musicians operating in a largely western European controlled system.