On the first day of musicology the class had a candid, inquisitive discussion about the origins of American music. We gracefully came to the conclusion that what we consider American music likely did not start with Bill Monroe and the Bluegrass Boys in the 1940s, and that it is more plausible that American musicking had been going on for hundreds of years before then, as Rhiannon Giddens suggests. We concluded by emphasizing the subjectivity of what American music is, and how identity and power often manipulate our definitions.

In researching early American music for this blog post, I noticed that much of the research I turned up quoted a father and son by the names of John and Alan Lomax. Alan Lomax is quoted as a credible historian and ethnomusicologist of the time who travelled across the US and Haiti documenting and recording local musics. One especially enthusiastic source exclaims that few sources deserve greater praise than him for “the preservation of America’s folk music.” It is astounding that he recorded over 5,000 hours of song recordings from people across the world during his travels which is mostly all accessible through online databases.

I rested on one particularly interesting set of recordings which features a singer by the stage name of Leadbelly. The story goes that Lomax discovered Leadbelly (Huddie William Ledbetter) and his music when visiting the prisons in Louisiana where he was imprisoned for murder. When he got out, the Lomaxes took him on tours around the United States where he performed and gained popularity to the point where many of his songs are today considered folk classics.

At this time in America during the depression of the 1930s the Lomaxes were in search of a cohesive identity for Americans to find in music. The fact that they looked to cotton plantations, ranches, and segregated prison music was purposeful and undeniably has altered the documentation of American music. However they also altered the music in which Leadbelly was able to perform. Listen to a Leadbelly original, Mr Tom Hughes Town as it was originally recorded in 1934:

…and now listen to this recording which was for the American Record Company:

For our purposes, I think it is most important to understand simply that these recordings are much different in their storyline and musical style. The Lomaxes often changed his music or told him to learn new music in order to appeal to audiences, specifically Whiter audiences. The second recording is thought to appeal more to Northern, whiter audiences as it is less “sharp-sounding.” In order to gain popularity, they would even have him dress in his prison clothes and purposefully include his backstory in shows to get people interested. 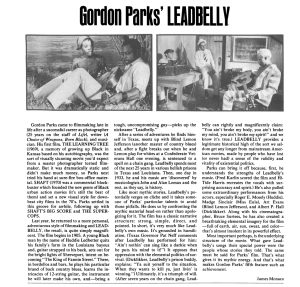 This is a stark contrast to the movie made about him some 40 years later in the 1970s in which he ends up in prison for playing music in a segregated country club. (see newspaper clipping attached)

I think the alteration of Leadbelly’s music illustrates importantly how progressivism may act as a convenient disguise for perpetuating the inequalities that such an ideology seeks to overcome.