While browsing the “American Indian Histories and Cultures” database, I came across this picture: 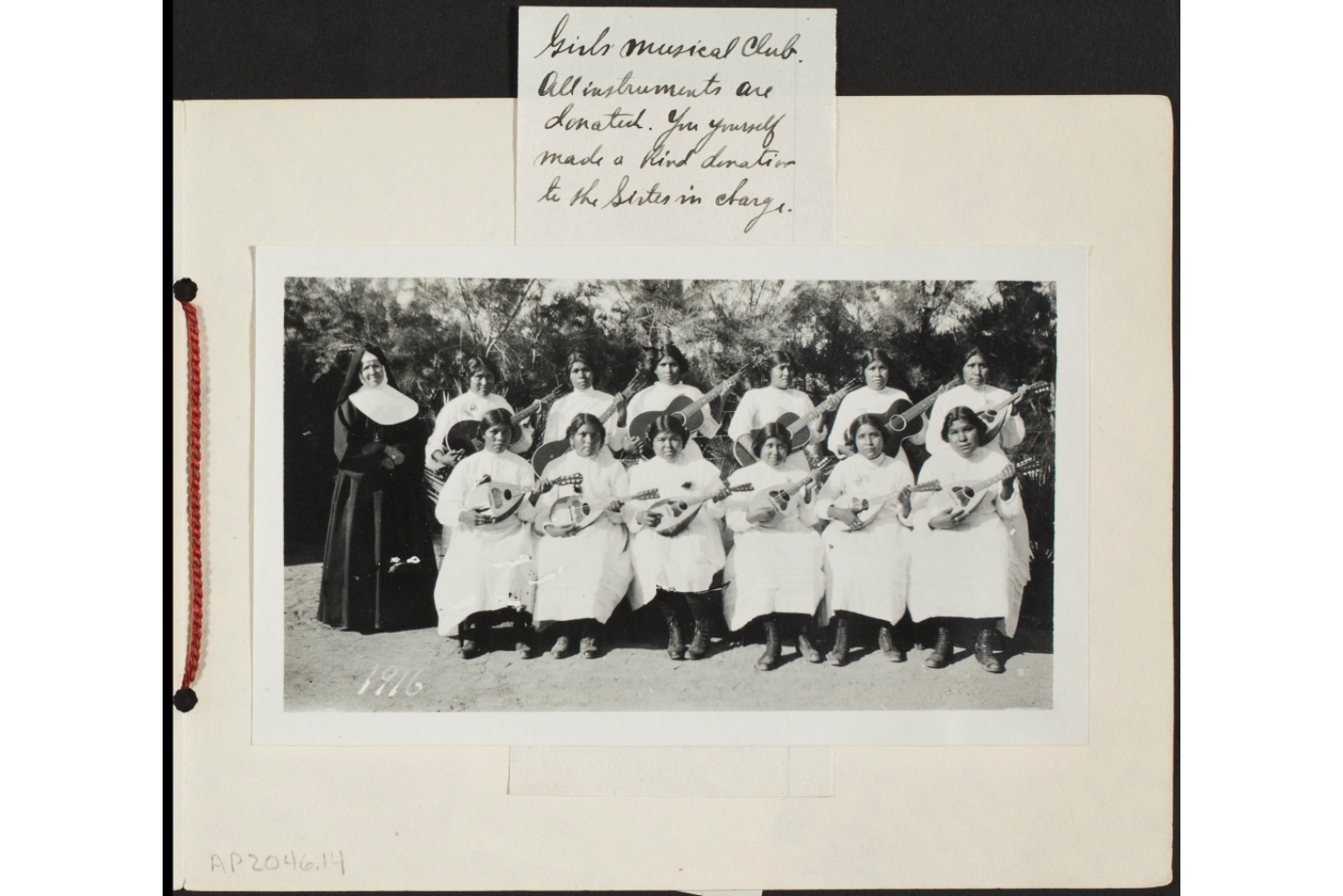 This picture is of the “Girl’s Musical Club” of the St. John’s Mission. The picture was taken in 1916. I noticed quite a few interesting things about this picture, notably the instruments the girls are holding (lutes and guitars), and the caption on the top of the photograph. It reads as follows:

“Girl’s musical club. All instruments are donated. You yourself made a kind donation to the Sisters in charge.”

And immediately I had more questions than answers. Who is this caption addressing? What is the girl’s musical club? Who made the donations and why? Who wrote this caption?

I did some digging, and found a bit of information. According to the Arizona Memory Project1, the St. John’s mission was located in Komatke Arizona, on the Gila River Indian Reservation. It did not appear to be hugely long-lasting or successful, but seemed to value a Western music education as important. In fact, after her appointment to missionary teacher, Mrs. Stout wrote a letter that drew attention to this fact. In 1872, she said,

“Let me thank you for sending us the organ and things for the children…The organ is such a nice one and pleased the children so much. It will be a great comfort to us also, for I don’t know what it is to live without some kind of a musical instrument…2“

It seems that the St. John’s Mission education recognized the innate human need for music. However, in the research I did, I found no discussion or report of Indigenous music from the missionary’s perspective. In the future, I think it would be interesting to try to locate sources that explicitly talked about Indigenous music from white people (especially missionaries’) perspective.

One thing that made this particular photograph initially interesting to me was not only the photograph itself, but the handwritten caption that goes along with it. To try to figure this one out, I generalized my research focus to try to find out about who would’ve donated instruments to schools or missionaries. Unfortunately, after many databases (including plain old Google), many search terms and phrases, and lots of frustration, I was unable to find much concrete evidence about this. My best inference is that these instruments were donated by either wealthy patrons/supporters of the missions, or were made cheaply for the express purpose of being a “school instrument”. I think the instruments were mass-manufactured (factory-made) in some way, because they all appear fairly similar, with the same body shapes, colors, and details.

It is still unclear to me who might’ve written this note and to whom it was addressed, and I want to try to do some more digging into this (look forward to my last blog post!).

While I still have many questions, one thing that is clear to me is the importance of music education to missionary schools, which also points to the high value white Europeans still placed on music even when they were geographically elsewhere.

First of all, I would like to say that I find it very cool that there are texts from the 1600s. Although the text I read was not the original copy, nor is it in the original language, it gives details on how and who translated it to a legible copy and annotations corresponding with the letter text. It is a collection of letters by Gabriel Diaz Vara Calderón, a 17th century bishop of Cuba. The purpose of his letters are clearly to observe and record his observations of Indigenous peoples and their land and forward this information to the queen (of Spain). He mainly gives information about the land and how it is utlized by the Indigenous peoples. He also details the queen with estimates of Indigenous populations within each village he finds. I’m really unsure of what the purpose for this was. My only inference is that this bishop is scouting out the land for the queen to do something with, however it sounds like at this time it was already controlled by the queen. I am surprised that when giving information about the populations of villages, the bishop distinguished the different villages instead of referring to all of them as “Native Americans”.

I cannot make this post without noting the disrespectful language used by this bishop to refer to the Indigenous peoples. In one of his entries, he describes Indigenous Carribeans as savages. He also uses the words “heathens” and “savages” throughout his letters to the queen. Although, after looking up the word “heathen” I realized it could be used to refer to someone that is a non-believer (in Christ). In modern language (and my perspective) heathen is an insult but I never associated it with religion. Now that I understand the meaning behind the term, it’s unsurprising to see it being used by this 17th century bishop as one of the main goals of colonization was to assimilate that people being colonized.