I found this manuscript 1 by Émile Petitot, a French missionary who conducted research among the Indigenous peoples of Northern Canada. His work looks much like that of Frances Densmore, with transcriptions of musics that he observed within the tribes. Accompanying each transcription is the tribe it comes from, a note about what kind of song/dance/game it is, and occasional extra notes. For example, in the screenshot provided, Petitot provides the tribe, “Tchippewayans,” (or Chippewa/Ojibwa), the type of song, “jeu de mains” (hand game- perhaps hand clapping?), and notes below explaining how they whistle the melody through their teeth, and that this example is possibly of Cree origin, though I could be translating the French incorrectly (Petitot, 3). 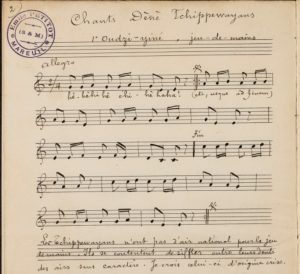 Petitot completed significant research on the native languages of Northern tribes, and according to Savoie in 19822, it “remains the best in the field” (Savoie, 446). But however groundbreaking or useful Petitot’s research was, his treatment of the Indigenous people was less than stellar. His notes seem to be overtly subjective and somewhat condescending, and according to Lévy,3 he also showed concerning sexual desires. He was rumored to engage in sexual relations with “young indigenous people,” as well as a woman who became so uncomfortable she attempted “self-circumcision as a way of suppressing his sexual desires” (Lévy, 2014). Clearly his methods were exploitative and harmful to those around him. Lévy also mentions that these acts eventually caught his missionary order’s attention in France, so he was exiled back home to write his “ethnographic and geographical” work (Lévy, 2014). 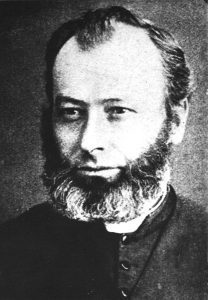 His research, controversy, and legacy is still discussed. In 2001, Struzik wrote an article 5 in the Edmonton Journal (Alberta, Canada) about the returning controversy surrounding Petitot. Buildings and parks named after him were quickly being renamed at the request and vote of Indigenous voices. Struzik exposes both sides of the controversy surrounding his sexuality and divergent sexual habits (Struzik, 2001). There are those who still consider him a genius for his work and research, and there are many who expose him for his exploitation, abuse, and madness. Some would say that any press is good press, but with all of his controversy exposed and the reason for his exile laid out in the open, I would say the legacy Petitot leaves behind is not one to be celebrated.

4 Image from ‘The Amerindians of the Canadian Northwest in the 19th Century, as seen by Emile Petitot. Volume 1: The Tchiglit Eskimos,’ found on Inuvialuit Living History (https://www.inuvialuitlivinghistory.ca/wiki_pages/Father%20%20%C3%89mile%20Petitot).