A prominent event in Southern music making of the nineteenth and early twentieth centuries was the singing convention. In rural areas of the South, families from neighboring farms would gather to sing sacred Christian music from shape note singing books such as The Sacred Harp. The singers used this type of musical notation because its utilization of only four solfege syllables and corresponding symbols made reading music easier (than traditional Western notation), and most people were able to learn the notation by attending local singing schools. In the excerpt below, a journalist from the Atlanta Constitution reports his observations from the 1892 Chattahoochee Musical Convention near Carrollton, Georgia: 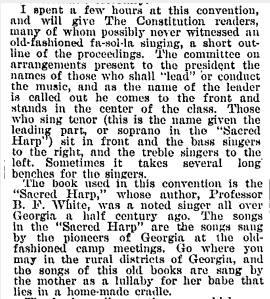 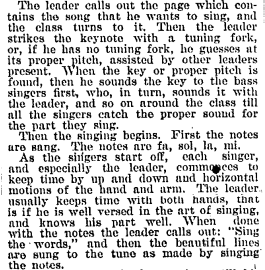 The journalist seems to be writing for an urban audience that would not be familiar with such a singing tradition. By referencing how a mother might sing these songs “as a lullaby for her babe,” he emphasizes the music’s importance as a transmitter of culture for rural folk.

The shape note singing described above ensured that anyone could participate after little practice. The singing style at singing conventions reflected this inclusive attitude as well as valued the individual spirit. Singers were not expected to blend with one another; rather, they sang at full volume in order to praise God at their highest capacity. The ability of individuals to worship depended on their zeal as they sang, not their wealth, community standing, or musical sophistication. The clip below from the 2010 Chattahoochee Musical Convention shows that this atmosphere remains today.

As documents from the nineteenth century reveal, gender also carried less importance at singing conventions, which made them significant events in the lives of women. The Atlanta Constitution article states that women were allowed unusual freedoms like being permitted to lead songs at singing conventions. 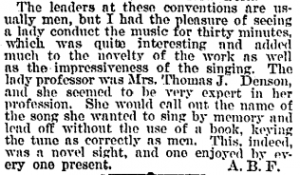 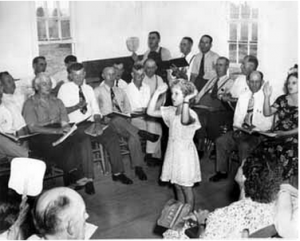 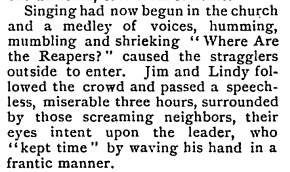 The women who read Arthur’s Home Magazine would have been interested in a story about a singing convention because the singing convention represented an arena in which a woman could participate in social activities without much attention paid to her gender.

Singing conventions were important in the lives of women for three main reasons: 1) they were integral to the transmission of culture, which has traditionally been the role of women,  2) they gave women leadership opportunities in worship, and 3) they provided social venues in which women had more freedom. However, while the democratic nature of the singing convention allowed for more equal treatment in regard to gender, it should not be overstated, considering that the spirit of inclusiveness did not extend to African-Americans. The tradition I have described above refers to white Southerners. Whether or not a similar treatment of gender occurred in separate African-American singing conventions remains a question for another blog.