The original building housing the Cherokee National Female Seminary, which burned down in 1987.

In 1951, the Cherokee Nation – having recently been forcibly moved to Oklahoma and re-formed their government in Tahlequah – opened the doors of the Cherokee National Female Seminary.1 The school was run by the tribal government and was extremely well regarded, generally considered better than the public school systems of several nearby states.2 On the Kaw (or Kanza) land3 that would one day become Northeastern State University, young Native women had what essentially amounts to a liberal arts education, including the study of music. 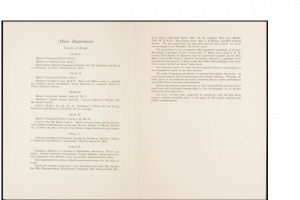 The school’s music curriculum, depicted here, was collected by Edward Ayer, a Field Museum of Natural History benefactor who evidently had some interest in salvage anthropology and Native cultures, and donated to Chicago’s Newberry Library in 1911.4 The text itself states that this donation was for the benefit of the Native peoples whom the school served – that is, in support of preserving their histories. Thankfully, Native communities seem to have been involved in assembling these texts, according to the collection itself, but I’m a touch skeptical of our white sponsor’s benevolence. What seems most likely to me is that this, like Frances Densmore’s work, is a product of good intentions, but would be taken less than positively if produced today. This is supported by the casual white-saviorism of the historical statement that opens the book; a statement which describes a European education as the “seed of civilization” and thereby strongly suggests that the curricula were a product of “civilizing” influence. Really the curriculum is quite similar to what a young piano student might begin with today, assuming their teacher were willing to center their education on the European canon; several technique and method books are employed, and the progression from grades I-VI moves from simple Clementi sonatinas to Chopin etudes and ballades.

Therein lies the interest of this artifact. As beloved as this school may have been to some attendees and some members of its community (according to the testimony at the beginning of the Ayer collection, that is), there seems little doubt that the Cherokee National Female Seminary was complicit in the whitewashing of Cherokee students following the Trail of Tears. If the curriculum is indisputably Eurocentric, implicitly devaluing the Native musical traditions which would have surrounded these students growing up, and taught exclusively by white teachers, how could it be anything else? It was a victory for the community, in a way, but one that was only necessitated by the awful realties of the white man’s westward expansion. The existence and community status of schools such as this adds another shade of nuance to the consideration of education as a tool for cultural erasure during this time period.

What I can say, however, is that this artifact makes a strong case for the rejection of the cannon that’s happening in music education today. If the cannon is part of what we now consider to be a heinous cultural genocide, how could we possibly justify not expanding our musical borders and changing our approaches to pedagogy from the very first days of a student’s musical life? Exclusion of a student’s cultural traditions from their music curricula, while it isn’t on the level of the violence inflicted on too many children at too many white-run boarding schools over the past several centuries, is an act of cultural violence. Music education must be rooted in a student’s internal musical self, in the music of the student’s community, to avoid the racist, classist valuation of music that’s persisted for centuries in the western world. Some pedagogical methods, like Kodaly, incorporate elements of this belief, and are gaining significance in the pedagogical world. But we have a long way to go yet toward the goal of making music education more equitable, just, and culturally inclusive.

3 I attempt to name the original tribe here out of respect for the land’s origins and to acknowledge (first steps) the settler-colonial history of the US. But a quick Google search will reveal that even the Kaw people may have immigrated to this area from the east coast in the 1600’s, and it’s difficult to trace the history any farther back than that. I include this footnote as a form of full disclosure and to encourage any interested reader to do some more digging into the topic.