The questions surrounding the origins of jazz, including what jazz is, where jazz came from and who performs jazz, abound. Numerous articles, books, and dissertations have these or similar titles in reference to jazz. Why? What is the reason? The true origins of jazz have been up for debate for quite some time. Scholars have extensively researched this issue, due in part to its wide and deep lineage of African and African American culture, as well as possessing strong roots in ragtime and blues. 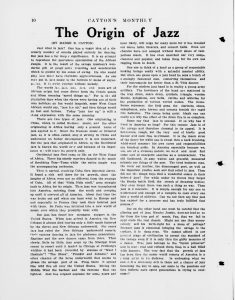 During my end of semester research on  “Early Jazz” and the pioneers of the jazz genre, I stumbled upon a newspaper article entitled, “The Origins of Jazz” written in 1921 by Madge R. Cayton. The article was published under “Cayton’s Monthly”, a column in the Seattle Republican newspaper. Madge’s father, Horace Roscoe Cayton Sr., was an American journalist and political activist who launched the Seattle Republican. As the biracial son of a slave and a white plantation owner’s daughter, Horace Cayton created the newspaper with the intention of appealing to black and white readers alike. Below is Madge R. Cayton’s “The Origins of Jazz” article. The article obnoxiously reflects the beliefs of the average white reader of this time period rather than those of the average black reader.

In her article, Cayton briefly explores the origins of the word “jazz” as well as the two specific types of jazz: the “Siamese jazz” which originated in China, and the “Oriental jazz” originating in Africa. Right from the outset, Cayton displays a narrow-minded view of the research on the origins of this “street rhythm” and a lackluster degree of understanding of the topic. Cayton focuses on the African “Oriental jazz” music, outlining her racist and discriminatory remarks. Throughout the article Cayton repeatedly conveys her distaste for jazz music and its glamorization of the African jungle, stating, “It is an attempt to reproduce the marvelous syncopation of the African Jungle. It is the result of the savage musician’s wonderful gift of progressive retarding and acceleration which is guided by his sense of ewing.”  The use of the word “savage” in describing the musicians is an immediate indicator of Cayton’s racist tone and underlying belief in white supremacy. The term “savages” has long been denounced as a racial stereotype for African Americans because of their basis in racially motivated scientific studies that found African Americans to be inferior to their white counterparts, making them closer to wild animals than to humans. Clayton continues her barrage of racialized and stereotyped comments on African Americans and their love for jazz music, pointing out a concern about the increasingly larger and more notable venues available to this performance tradition, “Jazz has reigned supreme for some years and most likely, will reign for many more for it has invaded our dance halls, theaters, and concert halls. Even our churches have not escaped without their share of tempestuous music. It has even snatched our very songs, classical and popular, and taken them for its own use, ragging them to death.”  This “invasion” Clayton suggests, should return its music to the “forest primeval” which is “more real and refined there than in a hall filled with dancers.” Clayton finishes expanding on the same belittling themes stating, “Because jazz is elemental bringing the savage to the surface, it is dangerous. We cannot afford in our present stage of civilization to accept the standard of the savage even if it is only through the giddy measure of a dance”. Based on Clayton’s writing, jazz puts civilization itself at stake.

I can say with a high degree of confidence that Ms. Cayton’s article on the origin of jazz should be considered frivolous in nature, repugnant given it is rooted in Jim Crow thinking, and filled with racist ideas and a display of close-mindedness common among a large number of white folks in the U.S. in the early 1900’s. Additionally, some people of color, denied the opportunity to learn better, held similar views. For more scholarly research and accurate information into the origins of jazz, pursued by bright, open minded college students, please follow this link >>> (will put link to final project here when finished).