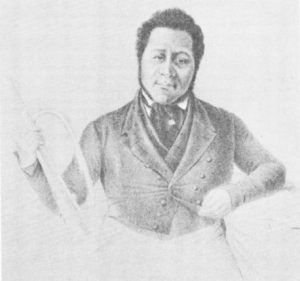 Francis Johnson was an African-American musician and composer during the early 19th century. He was known in Philadelphia as a professional musician but his even greater achievement was being a successful African-American composer in an institutionally racist society during a time when African-Americans were greatly discriminated against. Johnson was also well known for starting and leading an all African-American band that performed solely for Black communities. His fame would even allow him to travel to Europe, performing there and learning European musical styles. Perhaps one of his greatest accomplishments was bringing those styles of music to America.

After coming back from the first of few trips to Europe, Johnson led his all African-American band in Philadelphia’s first set of promenade concerts in 1838 and 1839. Not only was this performance a first due to the music, but it was also a first because of the racial composition of the band and composer. With the social climate in America during the time, one might wonder how this man was able to perform concerts like this or what the response to these concerts was like.

Eileen Southern was an African-American musicologist, researcher, author, and teacher who primarily focused on Black American music styles. According to her primary source research, Johnson’s concerts were received very well, packing the concert halls for every performance and leaving the audiences impressed.

A socialite, Sidney George Fisher wrote a review in his diary that talked about how successful Johnson’s promenade concerts were in the eyes of the public.

Although some of the comments on Johnson’s promenade concerts were bad, they shined light on how popular the concerts were. For example, in a review by a Scottish phrenologist, George Combe, who rented the floor below Johnson’s performances, the concerts were often attended by thousands of people who would applaud extremely loud after each piece.

The Public Ledger, a popular magazine, would often encourage its readers to attend Johnson’s concerts as the publishers of the magazine viewed Johnson as a very popular and well established and popular composer and band leader.

Due to the institutionally racist society during Francis Johnson’s time, reviews of this positive nature for a band composed entirely of African-Americans and led by an African-American, might seem crazy. However, due to Johnson’s prior success as a composer and musician, he was able to build a very high reputation that caused audiences to flock to his concerts. Johnson’s promenade concerts demonstrated some of his greatest accomplishments as a composer; integrating black and white audiences and bringing new styles of European music to America.