Jazz music emerged during the late 19th and early 20th centuries. Like early African-American music, there is an emphasis on call and response patterns or aspects. Moreover, jazz music’s lack of strict structure compared to western classical music gives the musicians freedom to develop and perform in their own distinct styles. This freedom of expression is seen by many as a way of evolving old Negro Spirituals into more contemporary forms of music. However, there are also many who see jazz music as a way of debasing the music and meanings of old spirituals.

In a Chicago Defender article entitled “Spiritualistic Start: That’s What “Jazz Music” had, Says Rosamond Johnson”, the author quotes Johnson’s perspective that jazz music will never die because it is the evolution of plantation music. Johnson, an African-American composer and singer during the Harlem Renaissance, goes on to explain how slave songs evolved into spirituals through the societal changes that African-Americans went through. He goes on to explain how unrest took hold of African-Americans, leading to syncopation and multiple rhythms being played over each other in spirituals, which he claims is the same basic principle of jazz music. Johnson also mentions western classical music, stating that syncopation and the use of many rhythms has made the great symphonies what they are today. In comparison, Johnson claims that by following these basic principles, jazz music is aiding in the appreciation of old spirituals by evolving them into a more contemporary form of music. 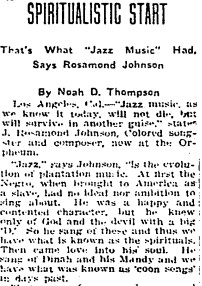 H.T. Burleigh had a contrasting opinion to Johnson in that jazz music actually debases spirituals. In a letter written to the public, Burleigh urges both races to preserve spirituals by stopping the progression of spirituals into jazz music. Burleigh claims that spirituals are the prized possession of the African-American race as they were created to demonstrate and perpetuate the struggles and emotions that African-Americans had during and after slavery. He goes even further to state that spirituals are the only legacy of slavery days that African-Americans can be proud of and that they are on the same level as great fold songs from around the world. By “perverting” the melodies and rhythms of spirituals into dance and popular songs, Burleigh says that it is destructive to the meanings of the original art forms, calling jazz music a misappropriation of spirituals.