Antonin Dvorak is perhaps one of the most well known composers to ever live. There are many stories about Dvorak’s time in America, but another topic worth noting is his rise to fame that would eventually lead to his time in America. Although his works themselves proved his merit as a composer, Dvorak was boosted into the spotlight with the help of Johannes Brahms. Although they never lived in the same region, their relationship was very important to both of them as composers and as friends.

In many biographies, the relationship between Dvorak and Brahms has been minimized not only by perennial placement of the two composers in separate chapters, but also by prejudices held by the chauvinistic views of the German people. Peter Petersen, a German musicologist, highlights the prejudices held by Germans in a critique of Dvorak’s history in Germany. 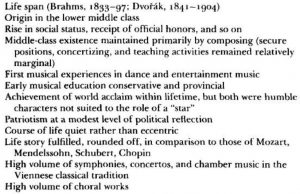 The next list shows some of the differences between the two composers. 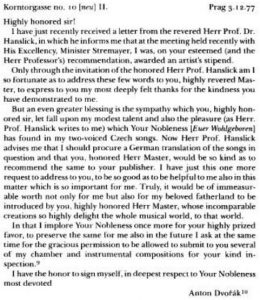 Dvorak first became known to Brahms after competing and winning three awards for composition competitions. However, their relationship wouldn’t begin until after Eduard Hanslick, a music critic, encouraged Dvorak to write letters to Brahms. In an attempt to flatter Brahms, Dvorak’s first letters exaggerated his familiarity and love for the great composer’s music. Dvorak’s first letter seems to try to establish a mentorship that would let him learn from Brahms. 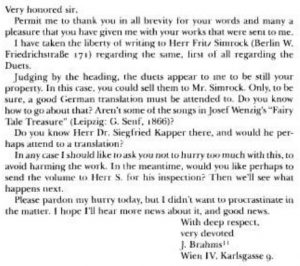 Brahms took an interest in Dvorak right away and connected him to Simrock, Brahms’ personal publisher. Although Brahms mentioned his dislike for letter writing, Dvorak was very persistent in building a relationship with Brahms. On one of Brahms’ concert tours, Dvorak sent multiple letters to the composer, an act that most would see as rude.

Through their shared composition profession, Dvorak and Brahms were able to overcome national prejudices and build a professional and personal relationship. Brahms even offered Dvorak his whole estate after his death. Dvorak’s relationship with Brahms not only helped him grow as a composer, but also helped to launch his works into the international spotlight. After his works were exposed to other countries, Dvorak would soon gain popularity, earning an honorary doctorate of music from the University of Cambridge. Moreover, Dvorak would eventually accept a position as director at the National Conservatory of Music in New York which kickstarted his time in the US where he would compose his New World Symphony.