An article published in the June 17, 1854 edition of The Circular reviews a recent choral and orchestral performance at New York City’s Crystal Palace 1, an exhibition venue built to rival London’s own Crystal Palace. The Crystal Palace opened in 1853, but was soon closed in 1854 due to financial constraints. Just four years later in 1854, the building and all its contents burned down.2 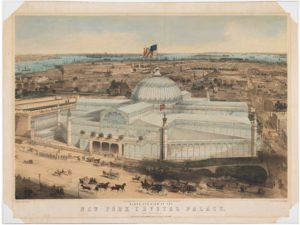 The Circular, a community-written and edited newspaper, makes sure to emphasize its values to its readers. The front page of this edition features the newspaper’s “fundamental principles,” “leading topics,” and “general platform,” all emphasizing a devotion to the Christian faith and the institution of Communism and Socialism. 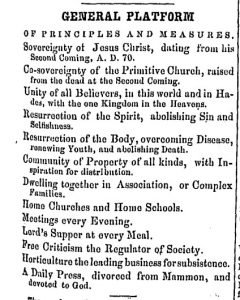 Later on, the publication features a positive review of a concert performed by the “Musical Congress,” under the direction of Louis-Antoine Jullien. The review details the pieces performed, such as Handel’s Messiah, and, in an interesting bit of foreshadowing, an original composition by M. Jullien entitled, The Fireman’s Quadrille. According to the review, Jullien’s piece tells a story of a fire and the firefighters’ heroism, “expressing in music the silence of the night, the alarm, the rush of engines, the crackling of the fire, crash and falling of buildings, the final victory of the firemen.” The author seems entranced by M. Jullien, even calling his baton a “wand,” implying a sense of magic to his conducting. Read the sheet music for The Fireman’s Quadrille here.3 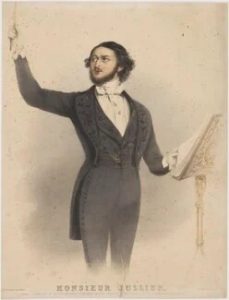 But perhaps the most interesting part is the author’s thoughts on Christian Communism as it relates to the performance. They speak of the performance as a “splendid exhibition of unity, and of difference in unity.” Their remarks center around one specific idea, that each musician is bound to a sense of togetherness, in that each part of the music is essential to creating the whole sound. The author remarks on hearing the orchestra producing one whole sound, as if it was coming only from one instrument, which they relate to Christian Communisim by saying, “In all this was represented the harmonizing of different gifts in the church.” The author remarks that thousands of people attended this concert, each presumably leaving the venue with different thoughts on the concert they just heard. Who knows how many of them would have left making connections to Christian Communism, and how many would have heard the same unity and, well, communism in the harmonies of the music that this author did?

2 Henry Raine, “What was the New York Crystal Palace, and where was it located?,” New York Historical Society Museum and Library, January 12, 2012, video, 1:00, https://www.nyhistory.org/community/new-yorks-crystal-palace