There is strong evidence to suggest that sensationalism occurred within the 1893 Chicago World’s Fair, specifically within the Native American exhibit. Professor Dan Blim of Denison University speaks to historian David Beck’s argument that “the fair provided Native Americans one of their earliest opportunities to self-represent rather than the familiar caricatures featured in Buffalo Bill’s traveling shows,” and that “the exhibit also generated interest in anthropological ethnography for some visitors, including Frances Densmore, who had her first encounter with Native American culture there [1].” Beck believes visitors came away from these exhibitions with a strong impression of Native Americans. For Blim, the exhibit “undoubtedly offer[ed] visitors a chance to engage in some form of colonialist tourism [1].” This idea of “colonial tourism” has made me question how visitors saw themselves in the context of the exhibit. Were visitors truly interested in gaining a deeper understanding of Native American culture, or were they there purely for entertainment?

In order to understand more about what the general public’s perception was about these exhibitions, I did some digging. I first looked at an article published in The American Antiquarian and Oriental Journal, called “Man and His Works,” written by Harlan Smith in 1892 before the fair had happened. The article speaks to the proposed plans of an “Indian school exhibit.” Smith explains the exhibit will show how “our government represents its method of educating and civilizing them, […] and will occupy four acres of land [2].” 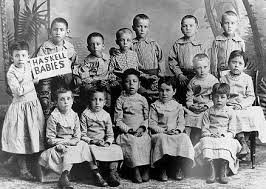 Students from the Haskell Indian School

To get a second perspective on what the general public thought of this specific exhibit, I looked at an article published in The Independent, an article that is published in 1893 after the fair had taken place. In the article, Carl Johnson describes an exhibit of the Haskell Indian School from Lawrence, Kansas “decidedly animate and correspondingly interesting[…] [3].”  The children in this exhibit were between ten and twenty years of age, and Johnson describes them as “a remarkably intelligent-looking lot of young people, who had none of that stolid, indifferent look common to the average Indian.” Johnson goes on to explain that the Native Americans “plainly desire to reverse that popular sentiment that ‘there is no good Indian except a dead one’.”

In my opinion, I think the Native American exhibit at the 1893 World’s Fair was there not only to entertain (which supports Blim’s argument of colonial tourism), but also to support the idea that the United States government was “saving the savages.”As we see in Smith’s article, the government specifically wanted the Indian school front and center as a tribute to “Man and His Works,” and while some visitors might have been there to gain a better understanding of Native American culture, the exhibit was so edited and controlled by those outside of the Native Americans that it had to have been nearly impossible to gain an accurate understanding. Both articles are heavily influenced by racist views (especially when Johnson explains what the “popular sentiment” of Native Americans was at the time). I was honestly kind of shocked that these articles were printed and accepted as the norm, and am thankful society has (mostly) developed a deeper understanding of respecting cultures. We still have a long way to go!

[1]. Blim, Daniel. “MacDowell’s Vanishing Indians.” Paper presented at the Annual Meeting of the American Musicological Society and the Society for Music Theory, Vancouver, BC, November 2016.

1 thought on “Woah Look at That! Colonial Tourism Within Chicago’s 1893 World’s Fair”