The source that I found for this blog post is Personal Experiences Among Our North American Indians 1867 to 1885 by William Thornton Parker. Parker was an author from New Mexico who studied at both Harvard and the Institute of Technology. One particular section of his book felt very relevant to our conversations from class, and was similar to the first assigned primary source readings we had. One segment focused in on the connection between dance and music that is so essential to Native American music, but is often left out in our education about it as a recording cannot fully convey what the Native American musicking experience was like. After he had personally observed a war dance, he states that “he [the dancer] dances with the peculiar motions of the Indian, so indescribable, yet so suggestive that he is able to convey to the onlookers the passions which sway him” (Parker, 14). I think this excerpt helps to demonstrate the complicated ways that Americans have historically, and currently, interact with native culture, and especially their music. They know it is passionate and feel the meaning but at the same time they find it odd and crude; simplifying it to be insignificant rather than putting effort into understanding.

Like in MacDowell’s Indian Suite, he is taking the elements from Native American music that he perceives to demonstrate the brute force and ignorant simplicity that Native Americans were inaccurately thought to have. He does this while wrapping it in a package of typical Western orchestration that is more palatable to a white audience, allowing them to further generalize and stereotype the culture from which this music was derived. Parker views these Native Americans in such a light, shown by his journals stating “the drums are, in fact, musicians skilled in this particular are of war-dance music” (14). The use of “in fact” in such a contrary way shows that the default idea is the Native Americans could not be skilled as musicians, and it’s almost as if he is patting himself on the back for noticing that there is actual depth to a cultural practice that has been going on for hundreds of years. 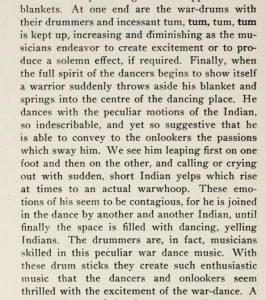 1 thought on “Misconceptions of Native American Music and Tradition”