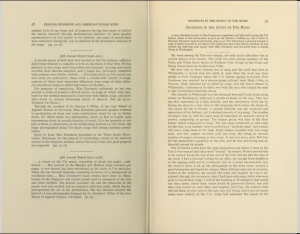 When studying Frances Densmore’s notes on the music of the Pawnee people, I was impressed that many recordings were supplemented with written European musical notation such as sheet music. Phonetic pronunciation of words and sounds were provided. It’s very clear that for the time, Densmore used all the resources available to her to put together an archive of Native American tribal music.
When reading through her memoir of Frances Densmore and American Indian Music, Densmore accounts on instances where her plans of recording tribes became difficult due to lack of cooperation. In this primary source dating from 1916, she recounts her first encounter with the Ute tribe, located on their Southwest Colorado reservation, and their disinterest in making an archive and recording.
She writes:
Not all Indian tribes have the same disposition and before I went to the Utes I was warned that they were “touchy” by nature. Events proved this to be correct. From the day of my arrival the Utes did not like the idea of my work. I had a pleasant cottage for an office, far enough from neighbors so the singing could not be overheard, and on a street conveniently near the trader’s store. I set up the phonograph in the front room, secured a good interpreter and hoped for singers. Many Indians came out of curiosity, looked in the windows, sat around the room and laughed. In vain I explained through the interpreter, that I had been with many tribes who were glad to record their songs. I told of the building in Washington that would not burn down, where their voices would be preserved forever, but still they only looked at each other and laughed (Densmore 39).

The lack of desire from these tribes to work with Densmore poses a problem. Densmore is a pioneer in her attempt to preserve the believed to be disappearing traditions of Native American tribes. Through all the work we have studied as a class, I believe her intentions were to give the most accurate preservation of the music and such is shown in the visceral work she provides through writing and recordings. This primary source makes me question the authenticity of the work Densmore strived for (the musical practices and songs of Native American tribes) given that there were clearly Native people who had no interest in cooperating with Densmore. There are many factors that make me question whether Densmore achieved the goal she set out. Not only were the people clearly apprehensive but their songs had been taken out of their ceremonious context.

The musicologist may have also brought some tension to the situation. In her article of The Music of American Indians, Densmore writes, “In all his means of expression, the Indian is still a child. When he dances, he puts his feet together and moves from side to side with a motion precisely like that of a three-year-old.” When the collector and performer comes to the act of recording with such tension and veracity, how can an accurate recreation of these practices take place? 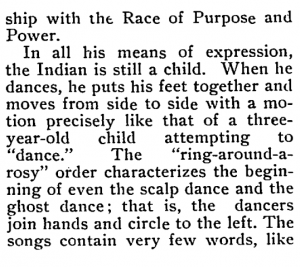 These sources open the audience up to the possibility that Densmore may have not achieved her goal. In the book, Densmore labels this section as “Incidents In The Study of Ute Music”. The format in which Densmore chooses to present the encounter becomes a question of biased as well as mention in The Music of American Indians that they are children. If the passage begins with her warning the reader of the tribe being “touchy” and continuing on to what allegedly happened, it stands to reason that other tribes may have felt uncomfortable taking part in Densmore’s work but had not spoken up.

1 thought on “Densmore and the uninterested Ute Tribe”