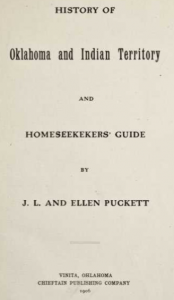 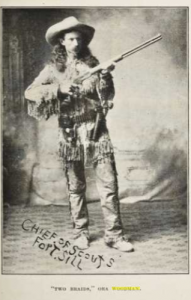 For this blog post I will examine the book History of Oklahoma and Indian Territory and homeseekers’ guide (Fig. 1), published in 1906 and written by James L. Puckett. The book itself is based on statements given to the author by different people that were in some way affiliated with the native American tribes in the area. The specific primary source is the experiences as stated by Ora. A. Woodman (Fig. 2)[1], after his capture during an Indian raid and the subsequent adolescence as part the tribe. Puckett stated that there is little to no evidence of Woodman’s ancestry or background, other than being born somewhere in western Texas before the civil war[2]. In the section I chose from this account, Woodman explains how the Native American music might be wrongly perceived (Fig. 3)[3] and how he views it. 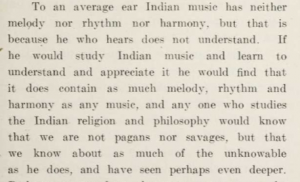 Why did Puckett include this rather nuanced encounter, stating somewhat radical opinions on Indian music, in his book? Woodman, with no recollections of his life outside the tribe and one could argue without the biases that comes with western, Eurocentric society, has an interesting platform for promoting the Native American cause. Or did Puckett simply include this story as a curiosity for the readers, a local Tarzan of sorts? Does he want to show the world the depravity attainable when one fraternizes too much with the natives? To find meaning and take pleasure in their music?

When it comes to Puckett’s personal views and credibility it is worth looking into his life story according to his own recollections, a separate chapter of the book, he began his career moving cattle in Arkansas of which he soon tired. After a failed courtship with a Cheyenne woman he went to Oklahoma where he had close friendship with a Cherokee man (Fig. 4 a and b)[4] culminating in him attending gatherings for the native tribes an interacting with them. 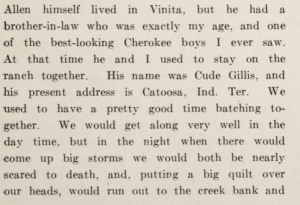 He ended up being married to three Cherokee women, separately, throughout his life and the book names the third one as a co-author (Fig.1). It seems to me that this is a life and the actions of a somewhat progressive thinker, through marriage and friendship he interacted a lot with native tribes and collected testimonies from them directly. in spite of this   it is important to highlight the somewhat autobiographical nature of this collection of experiences.

As far as the original or intended audience for this book Puckett writes that he believes what he calls his “memories” will be “worth something to people seeking homes in the new country”[5]. Considering this statement in light of what might be perceived as sympathetic undercurrents in the text, I would be inclined to assume that Puckett’s intentions were conscientious; That he wished that newcomers to the territory would have a better understanding of the land, its people and consequently their music.

1 thought on “Cultivating Compassion: an Unexpected Plea for the Native Americans”