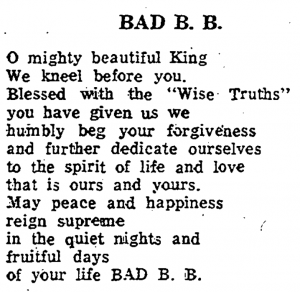 While browsing the Chicago Defender archives I discovered a newspaper article in which the author writes a short tribute to the legendary B.B. King. The author acclaims B.B. as well as other popular blues artists’ musical performance style saying that they communicate “simple and beautiful truth” that “touch[es] the inner core of black lives leaving us only to say, ‘he knows, he knows.'” In the poetic tribute, the author refers to B.B. as if he were a great king at the top of a royal ladder. He “beg[s] for forgiveness” and wishes to “further dedicate ourselves to the spirit of life and love that is ours and yours (B.B.’s).”

In the Popular Culture in Britain and America, 1950-1975 database I found another article praising B.B. King. The article in fact, was actually a response to comments made in a Mick Hutchinson interview. The author clearly has a strong opinion from the very first sentence in which he writes “In an interview with MickHutchinson (MusicIT/73) it was said among other stupidities, that BB King’s style lacked originality.” Clearly offended by these remarks, the author dives into an analysis of Mick Hutchinson’s musical ability in which he claims Hutchinson “can’t MOVE people, he hasn’t anything to lay on them.” The argument made is that though B.B. King is known for using simpler melodies and licks, he conveys far more meaning in it than Mick Hutchinson ever could. And if that wasn’t enough, the author even finishes the paragraph with an aggressive “(So UP YOURS Mick Hutchinson!!).”