His article titled “Slavery and Leadbelly are Gone, But the Old Songs Go Singing on,” complains that African Americans have forgotten their slave heritage. “In 1963 we will be one hundred years free. Have you forgotten that you were once a slave? Is it a memory you do not want to remember?” On one hand, singers like Leadbelly could be popular because there was a certain time distance from slavery so that musicians weren’t judged “Uncle Toms.”[1] On the other hand, there is some tension as to how the folk music out of the slave tradition should be remembered, because clearly Leadbelly’s songs that embody oppression and images of slavery remember it much differently than revivals of the blues and spirituals during the 50s and 60s. 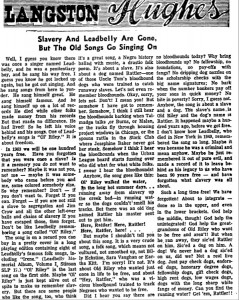 In another issue, “The Influence of Negro Music On American Entertainment,” Hughes celebrates the pervasiveness of African American folk music in American music. “The Negro has influenced all of American popular song and dance, and that influence has been on the whole, joyous and sound…America’s music is soaked in our rhythms.” It is no coincidence that Langston Hughes was writing during the civil rights movement, when African Americans often re-claimed and re-defined their identity in an effort to create unity and political momentum.[2] Many of the folk musicians singing about civil rights, however, were white musicians making money off a style that used the folk idiom to appeal to the popular masses. Langston Hughes is quick to criticize this, calling into question the definition of folk music, how it is used, how it is remembered, and who has the right and responsibility to perform it. 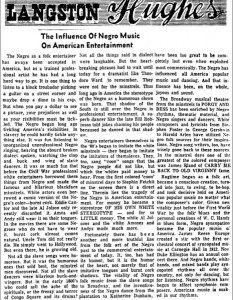