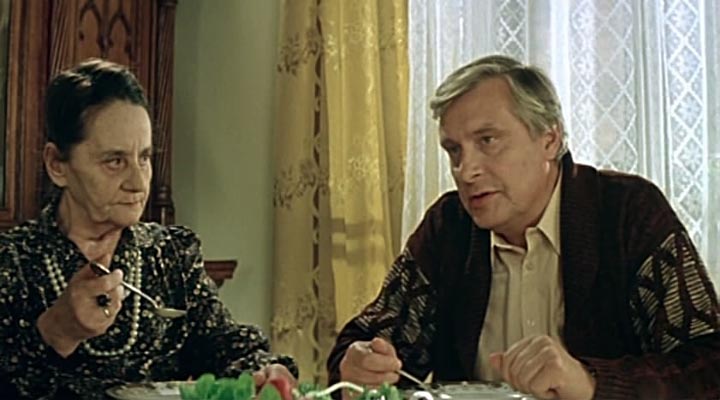 In the episode when professor Kuznetsov invites Ivan for a lunch and starts asking him about his principles of existence in society, Ivan replies that his principles are to have a good pay, a car, apartment, dacha and a cushy job. As a response to professor’s remark that one necessarily has to work hard to gain such material rewards, Ivan does a provocation. He says if he marries Kuznetsov’s daughter, professor would just organize it all for him. Audacity feels in these words and to highlight it even more in the story Ivan, looking straight in the eyes of Agnessa Ivanovna, bellowed as loud as he could “Eh?! Agnessa Ivanovna, eh?”. In the movie his tone of voice was different, Ivan just said these words with his normal voice. This change is a noteworthy detail. Karen Shakhnazarov preserved in Ivan his authentic characteristic, he challenges every authority he meets, but the level of Ivan’s imprudence in the film is a bit lower than that in the book because of this small adjustment.