This film brings the viewers back in the days of late USSR. In the period of perestroika in 1985-1991, right before the collapse, in the society at that time started to appear more and more anti-Soviet opinions after the unsuccessful attempts of Mikhail Gorbachev to reform the system, some of the reasons of which are described in the section Soviet bureaucracy. The film “Courier” by Karen Shakhnazarov is a great example of the spirit of changes (https://www.youtube.com/watch?v=FU8csnZxdPA)

and the Soviet youth rebellion against traditional lifestyle in the USSR. However after the collapse, for the former Soviet republics (CIS) started a darker line in life. In 1990s the level of life in the CIS states dropped significantly and people started feeling nostalgic for the USSR. Despite its drawbacks (deficit, egalitarianism, forcing everyone to work, lines, frequent cases of stealing, suppression of free thinking and dissent, censorship, border closures and economic instability) the standard of living in the USSR was still higher than that during the first decade after its collapse. With the gradual recovery of the economies of the CIS countries in the XXI century, less and less people want to revive the Soviet lifestyle. This is partly affected by the decrease of the percent of people who lived in the USSR in their conscientious age. While the main reasons of the nostalgia for the USSR are the sympathy to the socialist system and the way of life, appreciation of the heroic past of their country and its achievements in the international arena, as well as an underestimation of the actual deficiencies that existed in the USSR. In addition, it is suggested that nostalgia for the Soviet Union is often associated with the rejection of Western ideas and values, many of which are contradictory to the Soviet ones[4].

Soviet history is a subject of serious speculations in the modern Russia and in the world in general. A lot of articles and opinions about the USSR are quite subjective, because they often don’t reflect all the aspects of life and view the question from only one standpoint. Never the less, even among the current Russian younger generation, there are those who want the USSR to be recreated in one form or another, even though they never lived there. 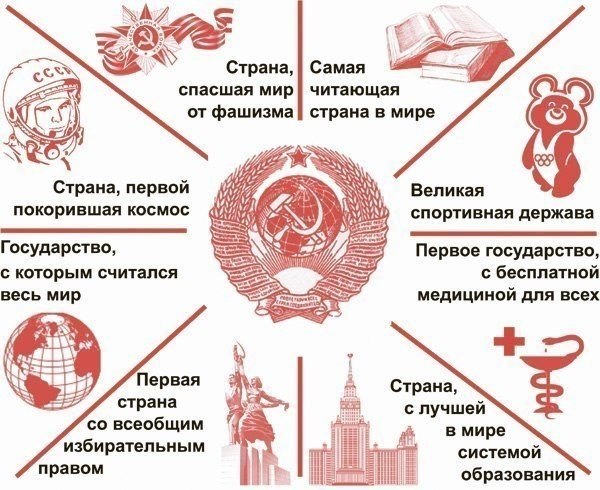 http://davidjidov.ru/?p=588 (These are the arguments that often make people who are nostalgic for the USSR. Translation: the country which sent the first person to space; the country which saved the world from Fascism; the most reading country in the world; the great sport success; the first state with a free healthcare for everyone; the country with the best educational system, the first country with election rights for everyone; the state that everyone recognized and respected). We did not check the credibility of the information, we just brought up a common opinion of people, who are nostalgic for the USSR.

According to leading sociological service of the Russian Federation, the number of citizens who are nostalgic for the Soviet Union, is reducing every year[1]. According to “Levada Center,” there is less than a half of these people[1]. However, the number of those who do not regret the collapse of the USSR, has been steadily increasing, this way in the year 2000 the figure was only 19%,[1] while in 2013 it had already reached 35%[1]. According to the Russian public opinion research center nostalgic for the Soviet Union are mostly people older than 45 years, as well as people with relatively low levels of education[1].