A fairly significant plotline in the story “Courier” is about a weird writer who wants Ivan to help him and tell if what he sees is really what he thinks it is. The characters meet when Ivan delivers back the writer’s fantastic story which is considered to be bad by the magazine critics. Vorobyov tries to convince Ivan that the story is good, and those critics are just incompetent. Then he briefly retells the story to Ivan.

In his story the new ice age has begun and people are suggesting to the government different programs on how to warm up the population: to give everyone a cistern of vodka, to make an artificial sun, to bring the Earth to another orbit and so on. The UN is rejecting all the projects one by one. Then out of a sudden appears some old man and shows a book where he predicted the Ice age half a century ago. Everyone is amazed and they decided to give him a Nobel prize, but suddenly one of the deputies says that the old man is to blame for the Ice Age because he brought the trouble by talking about it. So they decided to take off his head. — yeah, the story is really shitty, admitted the writer himself.

He also said that he just needs some money, that’s why he wanted it to be published so badly. The writer asked Ivan to come to his place at midnight to help him with a potentially great scientific discovery. This request lead to the ending of the book, different from that of a movie. At the end of the story Ivan comes to Vorobyov and they watch a woman in the window in front of their own, apparently with a whole bunch of other neighbours. They’ve heard Vorobyov talking to Ivan and joined the conversation. This satiric scene indicates how little privacy there was in the Soviet apartment buildings such as Khrushchevki.

In one of the film scripts instead of the writer there is a taxi driver who asked Ivan for a similar kind of offer. He was truly convinced that he saw a Kentavr several times in a park and he wanted Ivan to see it as well. So in one of the alternative endings Ivan comes to the taxi driver at midnight to see that Kentavr, but, to the disappointment of the taxist, it hasn’t come that night. Ivan tells the driver that he is drafted to the army and the next and last scene is when he is marching into an airplane with other paratroopers and singing a song “My dear capital, my golden Moscow”.

This ending is quite similar to the one that was shown in the film, when Ivan gives Bazin his coat with the words “take it, and dream about something great now”. After that he and looks in the eyes of a soldier with a big scar on his face, who has probably returned from the war in Afghanistan. 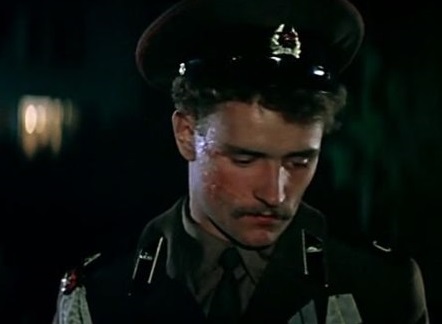