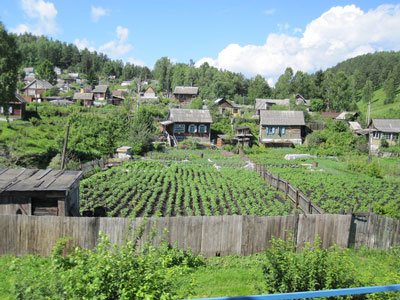 A dacha is a seasonal or year-round second home, often located in the exurbs of Russian and other post-Soviet cities. A cottage or shack serving as a family’s main or only home, or an outbuilding, is not considered a dacha. Dachas are very common in Russia, and are also widespread in most parts of the former Soviet Union and some countries of the former Eastern Bloc. It was estimated that in 1995 about 50% of Russian families living in large cities have dachas.[5] Most dachas are in colonies of dachas and garden plots near large cities, that have existed since the Soviet era, which consist of numerous small, typically 600 square metres (0.15 acres), land plots. They were initially intended only as recreation getaways of city dwellers and for the purpose of growing small gardens for food.[6] Dachas are used today for fishing, hunting, and other leisure activities. Growing garden crops is also quite popular, it is seen as an important part of dacha life.