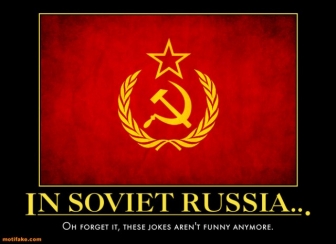 “Courier” contains plenty examples of distinctive national humor. It is noteworthy that this film generally doesn’t seem as funny to foreigners as it does for those who experienced soviet or post-soviet culture on themselves. In this film humor often appears as a sarcasm or absurdity told with a serious face. This humor is especially confusing, and the punchline in jokes appears unexpectedly, because during Perestroika, the time when the film takes place, absurdity and a fairly possible scenario  were so closely entangled, that the jokes and sarcasm appear camouflaged until the very last moment. Many of the jokes also require an insight in the culture and some historical background as well as some critical thinking. This kind of jokes are the hard nuts to crack but if one succeeds in recognizing humor in them it is a very special rewarding feeling.