Wampum is a traditional shell bead of the Native American tribes of the Eastern Woodlands. The beads are harvested from the shells of Western North Atlantic hard-shelled clams and are typically white and purple. Native Americans would harvest the clams in the summer and eat their contents before working on the shells. The process of creating wampum was long and hard, usually taking a full day to make just one bead. Shells would be ground or drilled down very carefully using rocks. Not only was the process difficult, but it was also somewhat dangerous, fine dust from the shaved off shells could cut up the lungs if ingested so Native Americans would often use water to limit the dust. 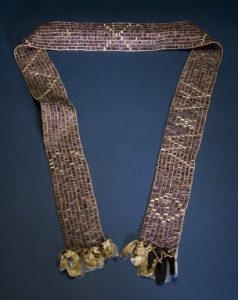 Wampum belt made of shell beads, buckskin, & ribbon. Anthro #A738.1

After the beads were made, they were placed on strings made of either plant fibers or animal tendons. They were often worn decoratively and sometimes even formed into belts which were used to tell stories and mark agreements between peoples. There were usually only two colors of wampum, white and purple, each having their own meanings. White wampum usually denoted purity or light while purple wampum typically represented war, grieving, and death. The two colors would often be combined to represent the duality of the world.

Wampum strings and belts had many uses such as currency, gifts, and a means of telling stories. Tribes would often trade wampum with each other in exchange for other goods. Due to the meaning of each color of bead, wampum was also used as a gift, white wampum being given to celebrate things like births or marriages and purple wampum being used for condolences after the loss of loved ones. Moreover, mixed belts, which represented the duality of the world, were given as peace treaties and used to tell stories to others and future generations. 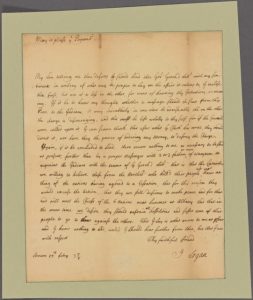 The worth of wampum was also recognized by many European settlers. A letter written to Thomas Penn from James Logan in 1937 shows that the Europeans knew the significance of wampum. In a proposal to meet the chiefs of the Six Nations at Albany, Logan proposed that Governor Gooche accompany his letter with 2 to 3 fathoms of wampum as a peace offering. Wampum beads and belts even became a commodity in Europe. In a receipt written from Isaac Low in 1769, a paper bundle of wampum was sold to someone in Europe for £15 11s. 6d. 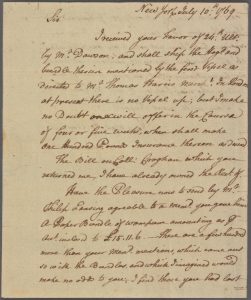 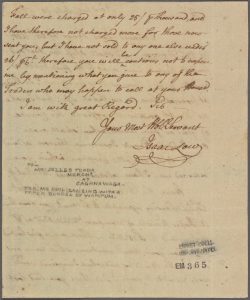