The character of “Jim Crow” has had a long and varied life. Most commonly known as the term for racism and segregation in the American south post-emancipation, the Jim crow was first popularized in the early nineteenth century through song and minstrelsy. Coming out of the song “Jump Jim Crow,” the character was physically manifested in blackface minstrelsy by white male performers. The exact origins of Jim Crow within the song are fuzzy, yet that did not seem to matter to Thomas Rice, the “father of minstrelsy,” who created a caricature out of Jim Crow.1

Although there are variations on the tale, the story goes that Thomas Rice, a white actor originally from New York City, had the idea to create the blackface character of Jim Crow after hearing a black man singing “Jump Jim Crow.”2 In a grotesque impression, Rice integrated the song and character into his traveling show. This early version of Jim Crow had one primary purpose: to make a profit for Thomas Rice by capitalizing on the willingness of white Americans to laugh at racist stereotypes. Despite the role that Jim Crow, and the song “Jump Jim Crow” played in perpetuating stereotypes by becoming the face and name of racism, the original intent was to make money by capitalizing on the social situation that already existed.

As a song written before Emancipation, Thomas Rice’s version of “Jump Jim Crow” is not especially remarkable in terms of its stance on race. Sung in a stereotypical “black” dialect, it tells the story of Jim Crow’s journey through the south from his perspective. He is presented as a violent man, who hits other people at least twice, and as a crazy man, who sits on sits on a hornet’s nest, and eats an alligator.3 The tune is jaunty and catchy, and the chorus is repeated frequently. Typical of its portrayal of black men by white men for the time, “Jump Jim Crow” provided an effective combination of catchy tune with an easily replicable character, making both the song and the blackface character financially profitable for Thomas Rice. Due to the success of this song and persona, Rice became one of the first blackface minstrels, touring the country with other productions such as “Ginger Blue” and “Jim Crow in London.” Rice commercialized and standardized the transfer of a little-known song into a profitable product that radicalized the racial stereotypes already present, and set the precedent for blackface minstrelsy characters and songs to come. From a character in a song, Jim Crow grew into a cultural marker of all that was wrong with white Americans’ attitudes and treatment of black Americans. Today, “Jump Jim Crow” is being re-appropriated without blackface. In the first clip, above, a man sings “Jump Jim Crow” without any “dialect” and without some verses. This version is much more languid than a modern instrumental version, linked below. The question remains of how much weight should be given to the connection between the song, the character, and the legacy of blackface minstrelsy. 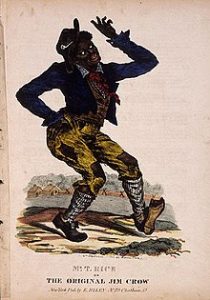 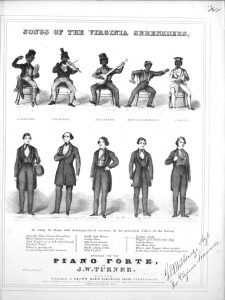