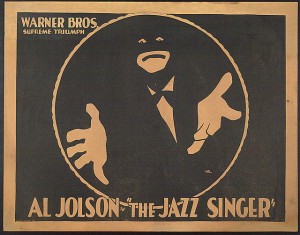 Much of the success of The Jazz Singer in 1927 is due to the massive popularity of the star Al Jolson. Regular concert goers and musical theater fans were familiar with Jolson who performed to sold-out audiences at the Winter Garden theater on Broadway. Jolson began performing in blackface make-up early in his career when he realized that it made him even more popular.[1]  Most of the music featured in the film is either traditional Jewish music such as Kaddish and Kol Nidre, or popular music of the time.

The popular music comes from successful writers Paul Dresser, Lewis Muir, Irving Berlin, and Walter Donaldson, among others. The popular music is all written and published before the filming of The Jazz Singer. Jolson often graces the covers of these published tunes, illustrating just how public he was in the music that he performed. While the movie plot follows the course of an aspiring minstrel singer, it basically functions as a minstrel show on film. This makes sense of course, but also falls to the problems with minstrel shows. Even more, the popularity of the movie comes from the popularity of Jolson and the music he has already made popular. 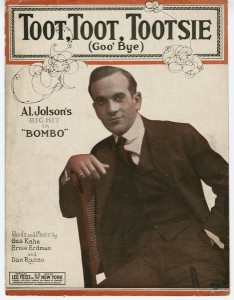 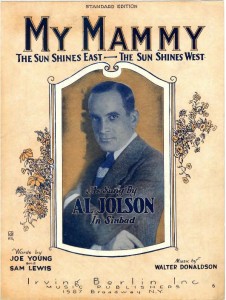 The movie is an attempt to gain as much publicity as possible by including several popular songs and a most popular actor, Jolson. Using the minstrel techniques to gain popularity ignores where they come from and places them on a stage which legitimized blackface as a way to confront discrimination on all accounts.