Who knew that Bob Dylan was in a movie? I sure didn’t, until reading this clipping from Chicago Defender‘s issue released May 23, 1973.  Announcing the premier of Pat Garrett and Billy The Kid, the author gives a short summary of the film and introduces the cast, which includes Bob Dylan.  About the actors, he writes, “The cast is…truly noteworthy and Peckinpah acknowledges that the process of finding the right actor for the right role was painstaking work.” 1 Peckinpah was the director of the film and had experienced success in the past, and he comments on the cast of stars with newcomer Bob Dylan to the scene.  He says “It pays off…with a great cast like this it’s almost gratuitous to say you’ve got a lot going for you.” 1 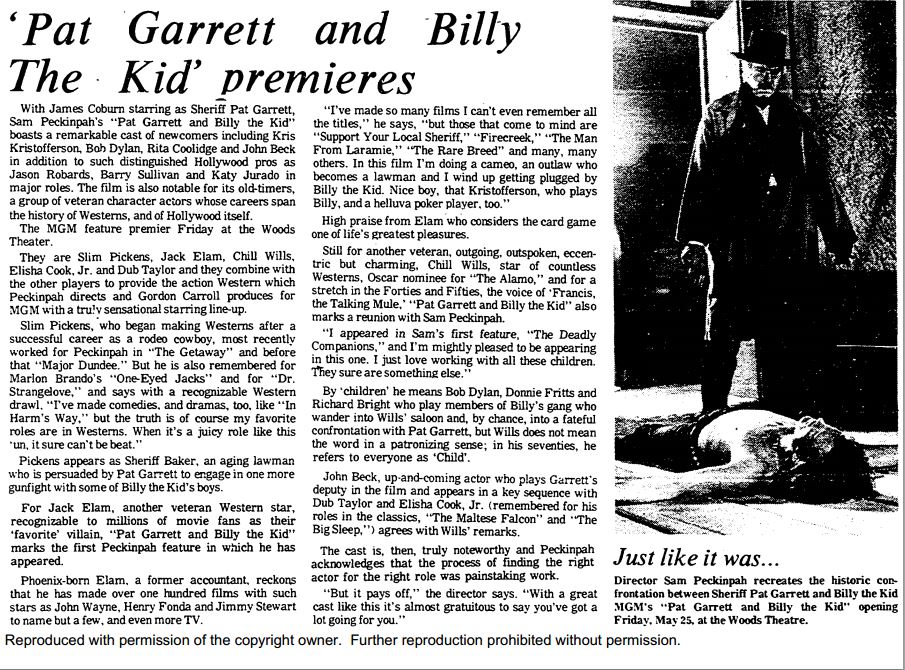 It appears that Peckinpah was perhaps counting on the fame of Dylan to bring the same success to this movie as others, as his acting is far from winning any academy wards in this film… and you can see for yourself.

The movie turned out to be a bust, and failed pretty miserably at the box office.  According to the IMDb website, it netted only $4.5 million in contrast with Peckinpah’s 1969 film The Wild Bunch which 4 years earlier netted $10.5 million. I find it interesting that the author of the Chicago Defender article, as well as Peckinbah, make no mention of Dylan’s musical contributions to the production.  After all, he provided much of the film score and music backing for the scenes, and perhaps the movie would have seen more success had it been advertised as having the music of Bob Dylan.

There was one success in the film, however, and that was the writing of Dylan’s original “Knockin’ on Heaven’s Door.”  Coming towards the end of the film, this song covers the scene in which a wife watches her husband die of a gunshot wound, and the lyrics and emotion are poignant.

This song saw a lot of success outside of the film, being performed on stage by Dylan himself, and covered by many other bands.  Some people forget that Dylan originally wrote the song, most often hearing covers by bands from Guns N’ Roses to even Avril Lavigne.

The final question remains: Why would Dylan even agree to be in a movie in the first place?  I could see him doing the score for a film when hired, but acting was something he had never done before.  I think people could use this as an example of Bob Dylan’s willingness to sell out for money.  It’s been said that he started writing and performing folk music in the first place because he saw there was an audience for it in New York.  After “going electric,” he revealed that he didn’t really like folk music all that much and preferred his plugged-in style.  If he was willing to sell out his musical style, why not be a terrible actor for money as well?