Romanticized notions about plantation life have a strong grip on the white American imagination – think Gone With The Wind, and a plethora of novels like it. This genre typically depicts enslaved people as happy and contented and focuses on the lives of the usually benevolent seeming enslavers. Overall the scene is idyllic, despite what the conditions for the enslaved people were actually like. This romanticized, exoticized view of enslaved people and their descendants is relevant to many publications from both before the Civil War and after, including one that I am going to focus on today: Plantation Songs for My Lady’s Banjo and Other Negro Lyrics & Monologues by Eli Shepperd with “Pictures from Life” by J. W. Otts, published in 1901. 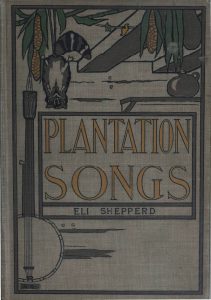 First just look at the cover of this book. There’s a banjo, some upside down corn, and some sort of exotic looking squirrel. The inside is full of photographs of rural Black people and poetry/song lyrics that have no context. When I first found this source I was thinking “What on earth is this? There has to be more context.” And it turns out there is, and that the context is intimately related to the plantation romance genre. Eli Shepperd was the pen name of a well known white Alabaman author, Martha Strudwick Young. Young was wealthy and educated and specialized in writing dialect poetry and fiction – in other words, she used the language of Black people, wrote from their perspective without their consent, and made a successful career out of it (Kobzeff). 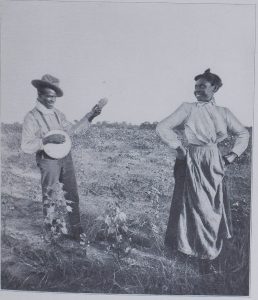 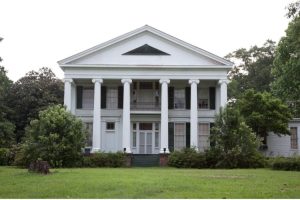 The house of JW Otts,  (Library of Congress)

I found the photographer, J.W. Otts, to be similarly wealthy and white, and this perspective definitely shows through in the photographs, which make out the lives of the Black people to be simple and happy. The picture at right is a good example of this bias. Interestingly, Young later went on to write several poems (again, from the perspective of Black people) about Black resistance to white photographers, which seems to indicate that she found the activities of photographers ethically questionable but never applied the same standards to her own work (Matthews).

Intrigued, I set about to find other perspectives that existed at the time regarding plantation songs, and began searching African American newspapers. One of the more interesting articles I found was titled “Coon Songs” and was written in 1914 for the Savannah Tribune, just a little over 10 years after the publication of Plantation Songs.

It wasn’t clear to me whether or not the author themself was Black, but the newspaper is definitely directed at a Black audience. The article actually had something in common with Young’s book – it makes a case for the preservation of plantation songs as a historical heritage. This is where the similarity ends. The author bemoans the fact that plantation songs are not being preserved by the new generation.

The author suggests that young men form classes to learn the old plantation songs “from the old people who are passing off the stage”, concluding that “a spirit of genuine patriotism and race pride calls upon intelligent men to preserve these true songs”.

The major difference between this article and Young’s book is that the author of the article argues for the preservation of plantation songs by learning from old performers for the purpose of uplifting Black people, while Young’s book attempts to preserve Black heritage in book form, through a white lens, for urban white people’s imaginations. Both respond to what was evidently viewed as a problem in the post-Reconstruction South – the old plantation songs were disappearing. And both strive to offer a remedy. The difference is who the remedy is for.