While looking through the database “African American Newspapers” for references to music, I came across a letter regarding a recent concert by the Hutchinson Family Singers for Henry Clay that included music thought to be abolitionist in nature.1 Published on in New York on March 22, 1848, this letter, from “L.P.” is addressed to Frederick Douglass, politely suggesting an alternate account of a performance Clay that Douglass had criticized. 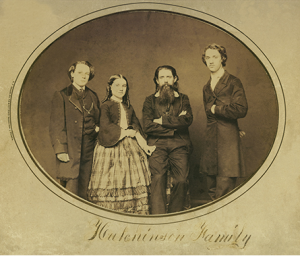 According to L.P., the Hutchinsons sang rousing abolitionist music, some of which had been added to in order to be more abolitionist. Douglass’s complaint was that the traditionally abolitionist Hutchinsons2 had gone over to the other side, singing in honor of Henry Clay, an American legislator who owned slaves but supported gradual emancipation.3 L.P., however, wished that “would to God that the Hutchinson Family might sing before every slaveholder in the land; the effect would be to greatly hasten on the ‘good time coming,’ when every slave should be emancipated, and mankind should love each other.” While the controversy of this performance is fascinating, diving into the songs mentioned in the article as abolitionist songs unearths an interesting contrast between these “abolition” songs and contemporaneous slave songs that yearned for freedom. 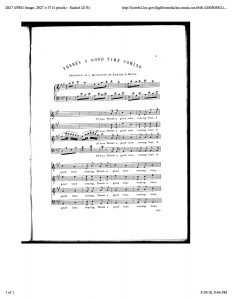 Sheet music for “The Old Granite State” from 1843. Verses about abolitionism and temperance were later added.

Once song mentioned in the 1848 article is “The Old Granite State.” Referencing 1843 sheet music for the song, repetitive lyrics suggest abolitionist themes such as refuge in the mountains, and feelings of  brotherhood.4 For a song meant to persuade the country to support emancipation and learn to love one another, however, the song falls short in retrospect. Upon further research however, it appears that the additional abolitionist verses mentioned by L.P. had not been added in 1843. As heard in a 2006 recording, additional verses dealt with the subject of slavery and emancipation.5

In the Old Granite State,

And we cannot be enslaved.

And we’ll sing the Proclamation

Till it echoes through our nation

From the Old Granite State.

That the tribe of Jesse,

That the tribe of Jesse,

That the tribe of Jesse

Are the friends of equal rights.6

It is quite evident from these verses that the Hutchinson’s demonstration of abolitionism was tightly tied to their New England pride. For example, this song that the article’s author claims could persuade slaveholders to support emancipation is named “The Old Granite State,” a nickname for New Hampshire. 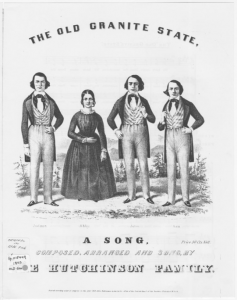 The Hutchinsons’ and L.P.’s understanding of emancipation and the need for freedom as expressed through song appear to be quite different that of the slaves themselves. Instead, many slave songs dealt with themes of Christianity, and the need to hold onto God’s love in order to get to a better place, spiritually and physically.  Songs like “Go in the Wilderness” were rooted in the reality of slavery, and the need to escape through faith, hope and perseverance. Singing was a way of survival.7 The Hutchinsons, however, chose to use music to express their belief in abolition and temperance through the lense of their New Hampshire pride. While there is no reason that the Hutchinson’s song for emancipation and slave songs should be exactly the same, it is important to note the different tones that each take, as it is reminiscent of parallel differences between African Americans and white northerners about the importance of freedom and equality in comparison to other social issues.

Perhaps, then, Douglass was right to chide the Hutchinson’s for their mild claim to abolitionism. Could a family of white New Englanders be adequate ambassadors for abolition to Henry Clay? Or perhaps there was something truly special about the way the Hutchinson Family Singers performed on that night, as the author of the article claimed.