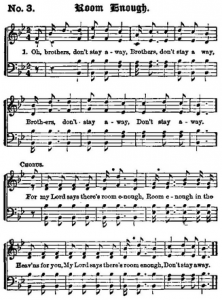 Oh, the irony. As the widely acclaimed Fisk Jubilee Singers preached this message of welcome to thousands of concertgoers, yes, they themselves were met with respect and praise by audiences, but all too often they were also greeted with closed doors.

In 1872, only a year after the ensemble began touring the United States and only a few days after receiving “continuous ovation” as guests of the governor of Connecticut, they were turned out of a tavernkeeper’s hostelry. When the Jubilee Singers booked the rooms, he assumed they were a company of blackface minstrels. Upon discovering they were the real deal, not a group of white people engaged in cruel mimicry, he could no longer stomach hosting them. A scathing account of this incident appearing in the March 14, 1872, edition of New York’s The Independent mocks the “publican” tavernkeeper for showing more respect to the “burnt cork of the harlequin,” the blackface of minstrelsy, than the “pigment . . . of [the Creator’s] own hands”:

A similar incident, layered in even greater irony, occurred in Jersey City later that same year. Mr. Warner, the proprietor of the American House, a place most would assume to be welcoming to Americans of all colors, had a misspelled cable sent to the Jubilee Singers’ sponsor, the Amercian [sic] Missionary Association, saying:

After insulting the intellect of Mr. Warner and his clerk, The Independent writer rightly wrote, ” Somebody ought to teach this patriot to spell “American” a little less violently.”

In 1880, they were refused at the St. Nicholas Hotel in Abraham Lincoln’s hometown of Springfield, IL. The Springfield audience greeted this news with hisses and cries of “shame!”

Perhaps the greatest example of a mixed welcome occurred two years later during their visit to Washington, D.C. After they were turned out of numerous hotels in the nation’s capital, they wandered the city until midnight, when they managed to find lodging in private homes. A few days later, they were at the White House at the invitation of President Chester A. Arthur. The Singers brought the president to tears with a performance of “Steal Away to Jesus” and the Lord’s Prayer. “I have never in my life been so much moved,” said the president.

As a culture, we seem to deal best with small changes: from plantation houses to concert halls, from no money to admission prices. We say all we want, using overblown platitudes to demonstrate our support for a cause, but we do as little as we can, avoiding actions that put any kind of strain on our time, budgets, or attitudes, even if a small change on our part could change someone else’s life. Look to the examples of the people of Springfield, President Arthur, and the writers, and go even farther: back up your words with actions. Otherwise, you’re only a hypocrite.